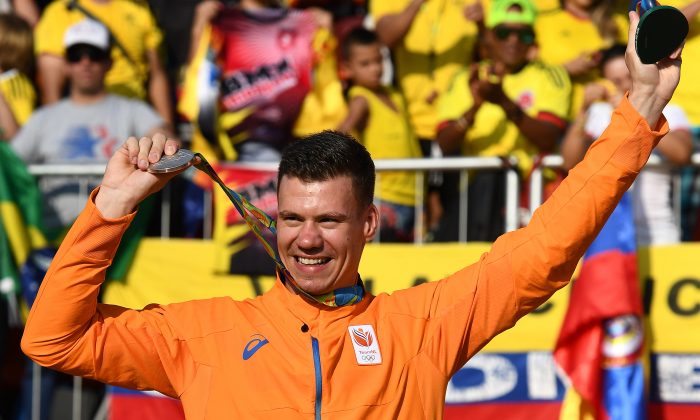 Olympic BMX cycling silver medalist Jelle van Gorkom is in a coma after crashing hard while training in his home nation of the Netherlands.

The 27-year-old cyclist was practicing at the Dutch National Sports Centre in Papendal near Arnheim on Jan. 11 when he wiped out at the base of the starting ramp.

Royal Dutch Cycling Union (KNWU) reported that he suffered “broken ribs, a fracture in the face, a tear in the skull, and damage to the liver, spleen, and kidneys.”

Jochem Schellens, director of the National Sports Centre, said on the KNWU website, “It is a terrible accident and at the moment we are mainly with our thoughts at Jelle van Gorkom, his girlfriend, and his family and we wish them all the strength in the coming period.”

National BMX cycling coach Bas de Bever added that he hoped Jelle’s partner and family would be given “peace and privacy.”

Van Gorkom won the silver medal in BMX at the 2016 Olympics in Rio.

BMX racing offers short, intense competitions, often less than 30 seconds long, where riders negotiate many small ramps and steeply banked corners, spending much of the time flying through the air.

This is the second time Van Gorkom has been in a coma due to a cycling crash.

According to his website, Van Gorkom started riding at age 4 and turned pro at 18. He was too young to compete in the 2008 Olympics, so he set his sights on 2012.

While preparing for the 2012 Games, Van Gorkum crashed badly at an event in Chula Vista, California, which made it impossible for him to contest for medals at the 2012 London Games—he competed in London less than four months after coming out of a coma.

While the Chula Vista and Netherlands crashes were the worst, Van Gorkum has tasted the track many times throughout his career. In 2015 he broke both clavicles, and in 2016 suffered another snapped collarbone, wave965 reported.