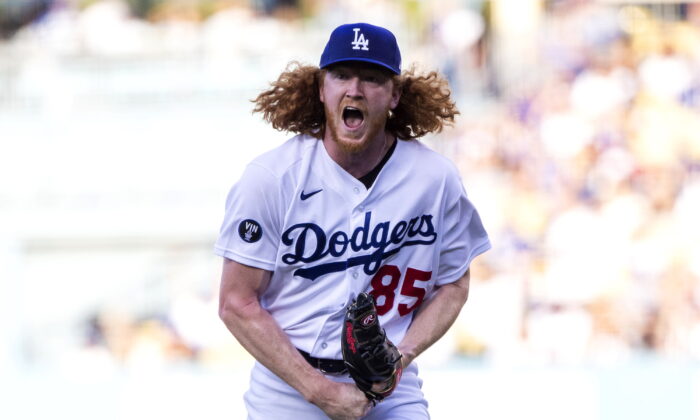 Los Angeles Dodgers starting pitcher Dustin May reacts on the mound after striking out Miami Marlins' Nick Fortes, with the bases loaded, during the first inning of a baseball game in Los Angeles, Aug. 20, 2022. (Alex Gallardo/AP Photo)
Baseball

LOS ANGELES—Dustin May dominated for five innings in his return from Tommy John surgery, Will Smith and Justin Turner hit three-run homers and the Los Angeles Dodgers rolled to a 7–0 victory Saturday over the Miami Marlins.

In his first big league start since May 2021, May gave up just one hit, struck out nine and walked two. He retired his last 13 batters.

The 24-year-old righty with the long, red hair, who showed exceptional promise in parts of the last three seasons, gave signs that he could be a key contributor down the stretch and into the playoffs for the team with the best record in the majors.

May’s return came after the Dodgers learned Monday that right-hander Walker Buehler (elbow) will need to undergo surgery and would be out for the remainder of the season.

Freddie Freeman also drove in a run for the Dodgers, who extended their home winning streak to eight games.

It was a rocky day for the Marlins, who first scratched scheduled starter Braxton Garrett because of an oblique strain. Manager Don Mattingly gave Bryan Hoeing (0–1) the start in his major league debut, but the right-hander was tagged for seven runs and eight hits in three innings.

The Marlins managed just three hits, with Jon Berti getting two of them, as they lost for the seventh time in their last nine games.

May wobbled early, giving up a single to Miami’s Joey Wendle on his third pitch. After Wendle stole second base, May walked JJ Bleday and Brian Anderson on eight consecutive balls, but struck out Nick Fortes to end the threat.

The Dodgers did what the Marlins could not, by cashing in an early opportunity. Trea Turner and Freeman singled in the first inning and Smith followed with his 18th home run.

Hoeing faced the minimum three batters in the second inning, but was hit hard again in the third.

Mookie Betts, Trea Turner and Freeman all singled to open the inning, with Freeman driving in a run for a 4–0 lead.

After Hoeing got a sense of revenge on Smith with a strikeout, Justin Turner hit his three-run home run to left, his ninth on the season.

Marlins: With Garrett moved to the IL and Hoeing called up, RHP Anthony Bender was placed on the 60-day IL in advance of his Tommy John surgery.

Dodgers: LHP Clayton Kershaw (back) came out of his bullpen session Friday feeling fine and could be ready to progress to a simulated game or a live batting practice session.

Despite not pitching since August 4, Kershaw might skip a minor league rehab assignment.

LHP Danny Duffy (elbow) began a rehab assignment at the team’s facility in Arizona and has not been ruled out from returning this season.

RHP Tommy Kahnle (elbow) threw a simulated game Saturday and is close to heading out for a rehab assignment.