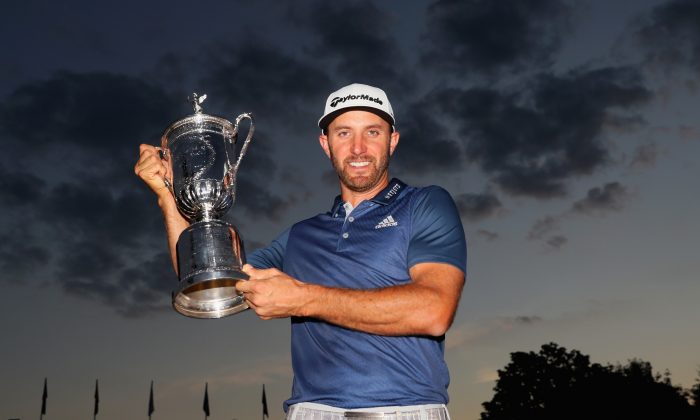 Dustin Johnson Wins First Major at Oakmont in US Open

OAKMONT, PA.—What a difference a year makes. Last year Dustin Johnson stood 12-feet away from a finishing eagle putt to win his first major at the U.S. Open at Chambers Bay. Just a few minutes later Johnson walked off the 18th green a one stroke runner-up to winner Jordan Spieth.

Fast forward one year later and on the traditional Father’s Day finish — the 32-year-old talent — finally got over the major hump that had stymied him for all of his professional golf career — winning his first major golf championship at storied Oakmont with steady play down the stretch — capped off with a declarative 4-foot birdie putt at the 72nd hole.

Johnson’s win was three strokes over a trio of golfers — Irishman Shane Lowry and Americans Scott Piercy and Jim Furyk. Furyk’s 2nd place finish replicated what he did in 2007 the last time the Open was played at Oakmont in losing by a stroke to winner Angel Cabrera.

The final round was a tense affair with plenty of movement between the varying contenders. Johnson played in the penultimate pairing with Englishman Lee Westwood and he put himself to the test in having to make a testing 7-foot par putt at the 1st hole.

But just a few holes later the issue of how the US Open Championship would be resolved then became a clear issue of concern.

At the par-4 5th Johnson stood over a six-foot putt for par — and in the process in setting up to prepare to make the stroke — his ball moved ever so slightly. Johnson called in the USGA referee assigned to the group — and it was determined at that time no penalty would be given.

Play then continued with Johnson birdieing the demanding uphill par-4 9th and earning a tie for the lead with Lowry — who started the final round as leader by four shots.

Three holes later Johnson stood on the par-5 12th tee and USGA officials met to speak with him concerning the incident that had happened back on the 5th. The issue of whether the ball moved was still being weighed for a possible penalty. Johnson was told no final action had been taken and that when the round concluded he would be asked to review the video tape before a final action would be taken.

The involvement of a possible post championship action taking place was something that set in motion a period of confusion for the players and those in attendance and watching on television. Johnson was adamant when spoken to at the 12th he had not caused the ball to move. USGA officials eventually came on the telecast by FOX-Sports and explained that nothing had been finalized but the sentiment, as correctly noted by FOX golf analyst Paul Azinger, was that in all likelihood Johnson would be penalized one stroke for the ball movement at the 5th.

Johnson was the first to be told about what might happen with the USGA notifying all remaining competitors on the course about the situation at-hand. Johnson played on not knowing what might happen in the post-championship situation and after a three-putt bogey at the 14th — he was able to make in succession — a four-footer for par at the demanding 15th hole, a slippery 9-footer for another par at the long par-3 16th followed with another four-footer for par at the short par-4 17th.

With his fellow competitors falling by the wayside — Johnson stood on the long and arduous par-4 18th with either a three or four lead. Johnson did what he had been doing all throughout the event — spliced the fairway with 300+ yard drive and followed with a 190-yard 6-iron to four feet. Johnson stood over the slippery downhill putt and stroked it into the hole to the delight of the assembled masses that encircled the final hole.

Johnson fired a one-under-par 69 for the final round — including  a one-stroke penalty added — and his four-round total of 276 is the lowest 72-hole score ever attained by a player in the nine US Opens contested at Oakmont. The win by Johnson also makes him one of just four other US Open winners who finished second the year prior before winning the next year.

For Johnson the wherewithal to close out a major championship had been the main stumbling block for a career which has shown solid moments throughout his time as a professional golfer. The US Open title gives Johnson ten wins professionally and marks the 9th consecutive year he has won at least one event.

Lowry started the final round in a strong position — the only competitor to have shot no worse than par for his first three rounds. But Lowry’s form was slightly off and he played the outward nine in three-over-par 38 — eventually finishing with a six-over-par 76. Three successive bogies starting at the 14th doomed the Irishman’s chances at being the first golfer from The Emerald Isle to win the US Open.

The inability to know what might be done caused a great deal of anguish for all involved — most especially the USGA which found itself squarely in the spotlight. The uncertainty brought into play a very real possibility that a post-event ruling can actually determine the winner or if there might be a playoff to determine the winner. The inability to not know for sure also meant competing golfers would not know for sure what specific strategy to follow for the grueling holes each were playing.

Whether Johnson committed a violation is now more complicated under the 2016 edition of the Rules of Golf, which came out in January following a four-year review cycle. Under the old Rule 18-2b (Ball Moving after Address), a player is automatically assessed a one-stroke penalty if the ball moved. Under the new Rule 18-2 — a player is penalized if the facts show he caused the ball to move.

Typically a player would then have to move the ball back but Johnson did not do that. However, he avoided a two-stroke penalty because at the time of the ruling, the official on the green told him he could proceed.

In the minds of the USGA once Johnson soled his putter near the ball it was that action they believed caused the ball to move.

Johnson’s four stroke cushion rendered the matter of a one-stroke penalty being applied at the end of the round a moot point. But the possibility that the most important championship in American golf would be decided in a post-event application of a rule would likely have sparked a major outcry with sympathy overwhelming on Johnson’s behalf.

In the end — Johnson has pushed to the rear view mirror the past times he has played himself in various contending positions in major golf events and then failed to close any of them out with a triumph. His win at Oakmont may just be the springboard for other majors to follow. Golf’s next major event is The Open Championship at Royal Troon — in mid July.