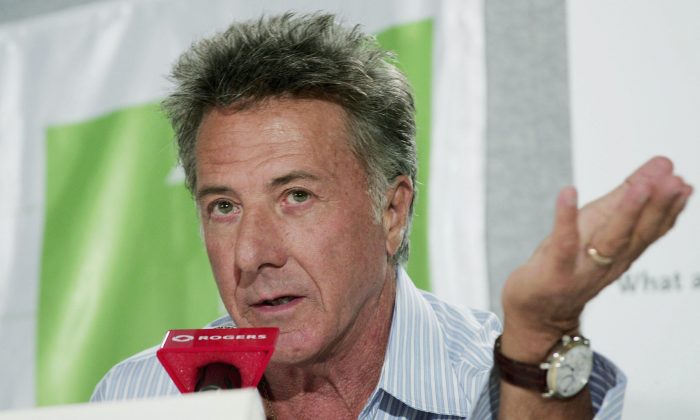 Actor Dustin Hoffman participates in a press conference for the film 'I Love Huckabees' at the Four Seaons Hotel, during the 2004 . (Evan Agostini/Getty Images)
Entertainment

Actor Dustin Hoffman has jumped into the fray on the Oscar controversy, where the host Chris Rock accused the Academy of racism against blacks.

For the second year in a row, no black Americans were nominated in the best actor and actress category.

It’s always been racism. It’s kind of a reflection of what the country is.
— Dustin Hoffman

“It’s the 88th Academy Awards, which means this whole black, no nominees thing has happened at least 71 other times,” Rock said in his opening monologue.

For Hoffman, the racism was predictable.

“Well, it’s always been that way. It’s not anything new, like Chris Rock, I heard said, ‘Why this year’,” Hoffman told the Associated Press. “”It’s always been racism. It’s kind of a reflection of what the country is.”

Earlier this year, Spike Lee, Jada Pinkett Smith, and others organized a boycott of the Oscars because of perceived racism. On Oscars night, Lee was seen at a basketball game with his wife.

“I went to see the Knicks game and saw my friend Spike Lee there all dressed up for the Oscars, but he was at the Knick game,” Hoffman said.

Trump on Oscar Boycott: ‘Whites Don’t Get Any Nominations’ on BET

Asked about the tactics of the people who protested the Oscars, Hoffman was sympathetic.

“We change when the people that are oppressed force it to change,” he said.