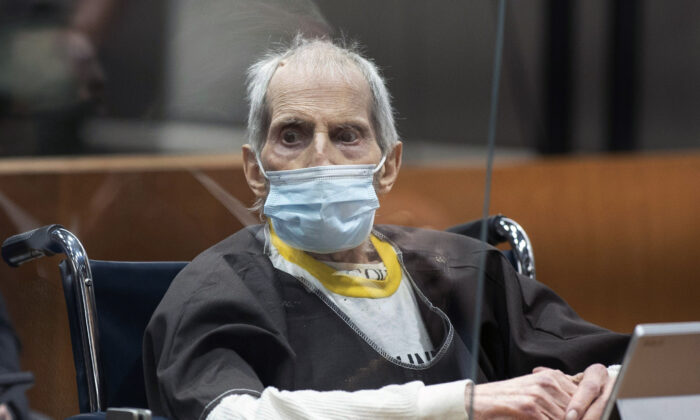 New York real estate scion Robert Durst, 78, sits in the courtroom as he is sentenced to life in prison without chance of parole at the Airport Courthouse in Los Angeles, on Oct. 14, 2021. (Myung J. Chung/Los Angeles Times via AP)
Southern California

Durst Faces Murder Charges in Death of His Former Wife

LOS ANGELES—Robert Durst, the New York real estate heir who was sentenced to life in prison without parole last week for murdering a confidante in Benedict Canyon, was charged in New York with the death of his former wife, Kathie Durst, who vanished in 1982, authorities confirmed Oct. 22.

Durst is accused of second-degree murder in a criminal complaint filed Tuesday by a state police investigator at a court in Lewisboro, New York.

“The Westchester County District Attorney’s Office can confirm that a complaint charging Robert Durst with the murder of Kathleen Durst was filed in Lewisboro Town Court on October 19, 2021. We have no further comment at this time,” Mimi Rocah, Westchester district attorney, posted on Twitter Friday morning.

In Los Angeles Superior Court, Durst, 78, was convicted Sept. 17 of first-degree murder for shooting Susan Berman in her home in December 2000.

Prosecutors said Durst killed Berman to prevent her from incriminating him in a renewed police investigation of Kathie Durst’s disappearance.

Durst is the grandson of Joseph Durst, founder of the Durst Organization, one of Manhattan’s largest commercial real estate firms.

Prosecutors estimate that Robert Durst’s share of the family fortune was $100 million.

In the days since he was convicted of murdering Berman, Durst has been hospitalized on a ventilator after testing positive for COVID-19.

Kathie Durst was 29 when she disappeared on Jan. 31, 1982. Her body was never found and she was declared legally dead, at her family’s request, in 2017. Robert Durst divorced Kathie Durst in 1990 citing abandonment.

He was never charged in her disappearance despite a number of efforts to close the case. Investigators reopened the case in 1999, searching a lake and the couple’s home. During his Los Angeles murder trial, Durst repeated denied having any involvement in his wife’s disappearance and presumed death.

Shortly after the verdict, Kathie Durst’s family issued a statement in which they said, “Today, more than ever before, it is clear that she was murdered by Robert Durst in Westchester County, New York, on January 31, 1982. The evidence is overwhelming. Although Durst has now been rightly convicted of killing Susan Berman, who helped him conceal the truth about Kathie’s death, the McCormack family is still waiting for justice. Kathie is still waiting for justice.”

“The justice system in Los Angeles has finally served the Berman family. It is now time for Westchester to do the same for the McCormack family and charge Durst for the murder of his wife, Kathie, which occurred almost 40 years ago. They have had interviews, statements and documents for months,” the family said in its statement.

Durst has been behind bars since March 14, 2015, when he was taken into custody in a New Orleans hotel room hours before the airing of the final episode of the six-part HBO documentary series “The Jinx: The Life and Deaths of Robert Durst,” which examined the disappearance of Kathie Durst and the shooting deaths of Berman and Morris Black, Durst’s then-neighbor in Texas in late 1982.

Durst was tried for Black’s killing and dismemberment, but he was acquitted, arguing that the gun went off accidentally during a struggle.

Prosecutors in that case also alleged that Black had figured out Durst’s true identity. Durst was in hiding at the time.