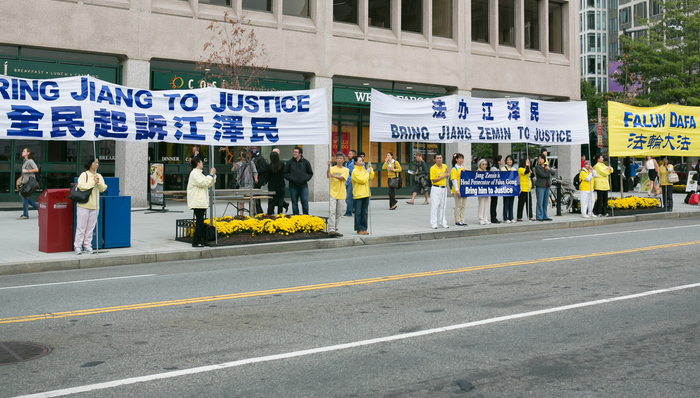 During Washington Jaunt, a Sight the Chinese Entourage Couldn’t Miss

WASHINGTON—From his arrival in the evening of Sept. 24, to his earlier-than-scheduled departure right after the state dinner in the White House the following evening, Chinese Communist Party leader Xi Jinping was followed wherever he went by banners calling for him to prosecute his predecessor.

“Bring Jiang to Justice,” or variations thereof, the banners said. Jiang Zemin is the former chief of the Communist Party. He stepped down from his official positions in 2002, but remained enormously powerful until at least 2012. He was also the initiator of the persecution against the Falun Gong spiritual practice, which became extremely popular in China during the 1990s. Jiang ordered it to be eradicated in 1999. Though the campaign failed to achieve its objectives, at least tens of thousands are believed to have been killed through torture, beatings, and organ harvesting, according to estimates by human rights researchers.

Now, 16 years later, practitioners of the discipline in the United States are calling on Xi to allow China’s prosecutorial bodies to investigate Jiang’s role in the persecution—which is ongoing as a matter of Communist Party policy—and put him on trial.

There were at least three occasions on which Xi Jinping’s entourage drove past the prominent banners in the streets of Washington, D.C. Since roads leading to the Washington Marriott Wardman Park, where Xi Jinping was staying, were flanked by Falun Gong protesters, his entourage passed close by just after arriving from the airport on Sept. 24, and then when traveling to the White House and back that night.

Police in the District were proactive in preventing welcoming groups, which are often mobilized by the Chinese Embassy, from blocking the Falun Gong banners, or even destroying them with their own flagpoles. Police on one occasion confiscated and snapped a pole bearing the Chinese national flag that had been put to that use.

“We hope that Xi Jinping puts Jiang Zemin on trial. We hope that he helps to end this persecution that Jiang Zemin single-handedly initiated,” said Frank Lee, a spokesperson for the Falun Gong community in Washington, D.C.

At least some Chinese Internet users also became aware of the nature of the Falun Gong demands, according to an exchange that took place on Sina Weibo, the Chinese equivalent of Twitter.

One user posted a photograph of Xi Jinping’s vehicle entourage moving through the streets showing in the corner a banner with the Chinese characters for”Prosecute.” Internet users responded: “What’s after the word ‘prosecute’?” and “Just who’s being prosecuted?”

One Chinese internet user wrote in response “ha” over a dozen times using the character that forms the first half of the word “toad.” Jiang is often mocked as a toad among Chinese Internet users, for his corpulent waist and large glasses.

The exchange shows ordinary Chinese people discussing, and gaining awareness of, the struggle by Falun Gong practitioners to seek redress for the persecution against them. The anti-Falun Gong campaign has been one of the most politically censored and taboo topics in modern China, and open discussion of it is typically prevented on the Chinese Internet by political and technological controls.

Yet another perceptive user wrote: “If I’m not wrong, the words in the second banner say ‘prosecute JZM.'”

With reporting by He Yi, Li Zhen, Xie Dongting, and Yi Ping.