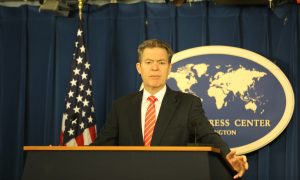 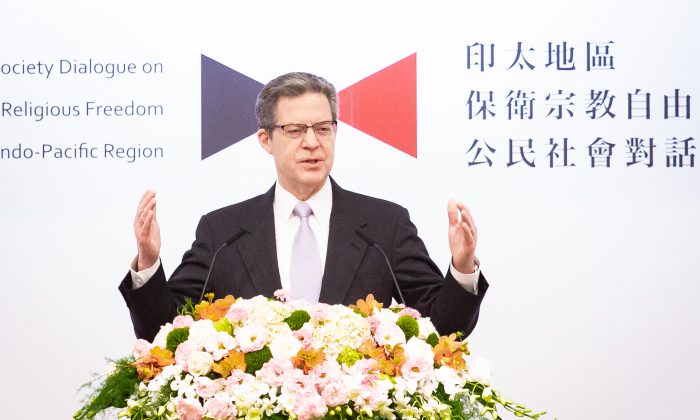 The Chairman of Taiwan Democracy Foundation, Su Jia-Chyuan, highlighted that March 10 marks the 60th anniversary of the 1959 Tibet Uprising, which the Chinese regime called “riots.” It was reported that China has barred foreign travelers from Tibet during this sensitive period until April 1. According to the International Campaign for Tibet, by December 2018, at least 155 Tibetans have self-immolated since Feb. 27, 2009 to strongly protest the Chinese communist regime’s harsh suppression of Tibetan Buddhism and brutal persecution of Tibetan monks.

Brownback expressed his concerns on the Vietnam government’s regulations over religious affairs. Vietnam’s National Assembly passed the Law on Belief and Religion in November 2016, which took effect on Jan. 1, 2018. According to this law, the Vietnamese government regulates legal procedures and conditions regarding people’s beliefs. So, local faith groups that are not registered with the government would not be recognized, and religious activities need approval from the Vietnamese authorities.

Regarding the U.S. Department of State’s annual report on Countries of Particular Concerns (CPC) for religious persecution, Brownback specifically criticized the religious persecution in Burma of Christians and Rohingya Muslims. For sure, the focus of his speech was on China. There were several survivors from different persecuted religious groups who participatd in the forum, including Dawa Tsering, the Dalai Lama’s representative at the Office of Tibet in Taipei, as well as Rushan Abbas, the leader at the Campaigns for Uyghurs. Brownback recognized these survivors and also mentioned Rev. John Sanqiang Cao, who was detained by Chinese authorities since March 5, 2017 and then sentenced on March 2018 to seven years in prison. He mentioned again about the brutal persecution of Falun Gong which has lasted for two decades in China, while Falun Gong practitioners can enjoy the freedom to do meditation exercises across public parks in Taiwan.

Taiwan is the second stop for Brownback’s Asia trip this time. He had given a strong speech about all ongoing major religious persecutions committed by the Chinese communist regime on March 8 at the Foreign Correspondents’ Club in Hong Kong. However, on March 9, the Office of the Special Commissioner of the Ministry of Foreign Affairs of China expressed strong dissatisfaction and resolute opposition to Brownback’s remarks, blaming him for using religious issues to interfere in China’s internal affairs. Brownback responded to this blanket denial at a press conference in Taiwan. He said China should specifically answer the questions: Where are the missing individuals in the Uyghur transformation camps? Why can’t Chinese people buy Bibles online? Why did the Chinese regime close down some churches and temples recently?

Taiwan’s Deputy Minister of Foreign Affairs, Hsu Szu-chien, cited a recent speech by the U.S. Secretary of State Mike Pompeo: “Taiwan is also a democratic success story, a reliable partner, and a force for good in the world.” However, it remains to be seen whether the “force for good” is strong enough in Taiwan when confronting religious persecutions in mainland China.

Comparing to the straightforward criticism of China from Brownback, neither Deputy Minister Hsu nor President Tsai specifically called out China when they addressed authoritarian governments suppressing religions in their speeches. When Su Jia-Chyuan talked about the 60th anniversary of the 1959 Tibet Uprising, he did not mention “China.” Most of the forums held during the two-day event were closed-door discussions and panel sessions without media presence.

Brownback is expected to meet with Lee Ching-yu, the wife of jailed Taiwanese human rights advocate Lee Ming-che, during his stay in Taipei. Lee was arrested by the Chinese communist regime on March 2017 and then sentenced to five years in prison on November 2017, charged with “subversion of state power.” The rescue effort has been ongoing for two years.

In addition, Chiang Yung-Shin, a Taiwanese national who works as a foreign company executive in Thailand, is facing trial in Thailand for leasing a house as the office for Sound of Hope Radio Network, which broadcasts uncensored news into China. The Thai police who arrested Chiang told him that they were under pressure from the Chinese regime.

Brownback also accepted an interview with Radio Taiwan International to experience talking with a mainland Chinese audience via shortwave broadcast. In a meeting with the press after the radio show, he was asked about the challenges of dealing with the Chinese regime over religious persecutions. He said that his strength comes from watching the glowing faces of victims who survived religious persecutions and he believes that people’s faiths would grow stronger amid adversity.

While this conference is called the “Indo-Pacific Religious Freedom Forum” by the U.S. government, Taiwan calls this forum “A Civil Society Dialogue on Securing Religious Freedom in the Indo-Pacific Region.” The Taiwan version of the title appears to emphasize that the dialogue is among civil society groups, as if the Taiwan government is merely supporting an effort from civil society groups, rather than acting as a driving force.

Well, one thing is clear: this regional conference is surely different from the ministerial-level international religious freedom summit that the U.S. Department of State hosted last year.