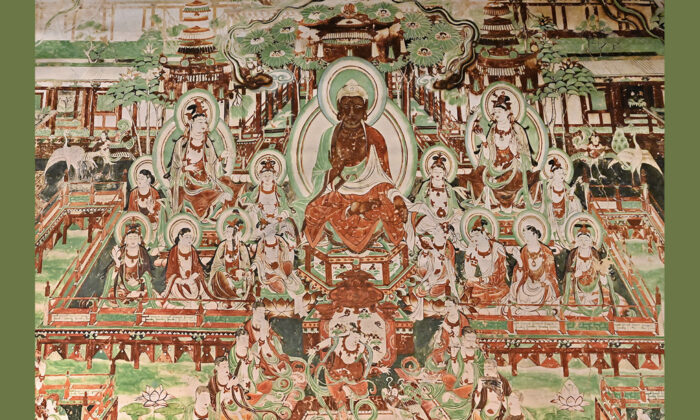 Dunhuang (敦煌), is a famous locale known for its Buddhist status and frescos and a critical hub of the ancient Silk Road.

Also known as the Mogao Grottoes, this UNESCO World Heritage site contains the largest collection of historic documents and Buddhist art along the Silk Road. Many of the richly decorated caves date from the Tang Dynasty (618-907 C.E.), which is considered to be the peak of Chinese civilization.

Shen Yun Symphony Orchestra also has a beautiful piece called Dunhuang – dedicated to the legacy of the Mogao Grottoes-Thousand Buddha Caves, home to one of the outstanding collections of Buddhist paintings and statues in the world.

The splendid and mysterious ancient China Culture long before the Chinese Communist Party.

Now the replicas of some of Dunhuang’s artworks are now being exhibited in Hong Kong for the third time, but this time it is in a new form. This is the first time for Cave 25 of the Yulin Grottoes to have been shown in Hong Kong.

The Hong Kong Heritage Museum cooperated with the Dunhuang Academy to bring the Dunhuang exhibition to Hong Kong for the third time, following those in 2014 and 2018. But this exhibition is more sophisticated, using art, technology, and music to lead visitors to experience the rich Buddhism realm of paying tribute to heaven, respecting the earth, and loving people. These are all rich sensations derived from the original ancient Dunhuang legacy.

The Hong Kong exhibition displays 50 collections, including silk paintings and bronze statue replicas. Among them, the painted gilt bronze head of the Tathagata Buddha, a bronze statue made in the later period of Tubo (current day Tibet), draws much attention.

Also worth mentioning is another key exhibit, displaying the theme of “Love Connecting All Beings: The Triple Projection Tunnel.” It comprises three parts: “The World of Vientiane,” “The Story of Buddha,” and “Merits without Bounds.” These are in the form of a digital time tunnel; it gives the audience inside the tunnel the chance to enjoy the outstanding appearance of numerous grottoes in succession.

The exhibition also includes a replica of Cave 25 of the Yulin Grottoes, which is exhibited in Hong Kong for the first time.

The museum reproduces the different murals and frescoes in the caves and pays much attention to analyzing the classic landscape scenes as expressed in the frescoes from an aesthetic point of view, as well as venturing further into exploring the relationship between people and nature inherent in ancient Dunhuang art.

In terms of scale, the Yulin Grottoes are second only to the Mogao Grottoes. The murals in the caves are magnificent in composition and go deep into the elements of Tubo culture. The paintings inside are exquisite and colourful, describing all the minute details of life in those affluent days of the Tang Dynasty at its prime.

Carmen Wong Ka-man, Curator of the Hong Kong Heritage Museum (Heritage Museum), said that the replica cave was produced full-size with high-definition printing technology. It is, therefore, able to fully preserve the original appearance of the cave.

To make the visit more enjoyable, the exhibition designers enhanced the viewing experience through lighting and background music. She also said that during the curatorial process, she took into consideration many of the expert opinions from the Dunhuang Academy to ensure the authenticity of the works.