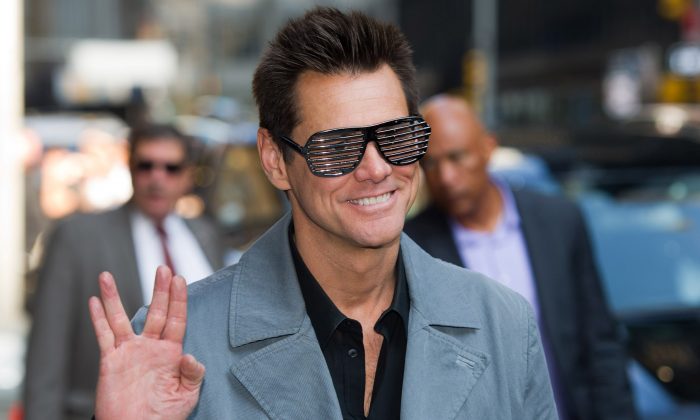 Jim Carrey leaves a taping of the "Late Show with David Letterman" in New York, July 4, 2013. "Kick-Ass 2" director Jeff Wadlow defended his film on Tuesday Aug. 6, 2013 after star Jim Carrey chose not to support the action comedy because of its violence. Carrey, who plays vigilante Colonel Stars and Stripes in the sequel to the 2010 hit, has distanced himself from the film, saying the shooting massacre at Connecticut's Sandy Hook Elementary school changed his perspective. (AP Photo/Charles Sykes)
Entertainment

“It’s just really fantastic getting together with the old group again,” Carrey told HitFlix and was referring to directors Bobby and Peter Farrelly and co-star Jeff Daniels.

He said, “I just saw an assemblage of the new movie… it’s just so fun, it’s almost a dissociative experience now. Harry and Lloyd are kind of their own people, like they actually exist. And they’re not me, that’s for sure.”

Referring to the performances, he said that it was like “no time had passed at all. It was great. He’s amazing,” referring to Daniels.

On Twitter, some people said they have already seen the movie as part of a test-screening for audiences, according to ScreenRant.

Another person said, “Dumb and Dumber To was hilarious. Everyone should watch it when it comes out!”

Said another, “Was in the first audience ever to see Dumb and Dumber To and y’all should see it when it comes out in November cause that shit is FUNNY.”

“Just saw the first sneak preview of Dumb and Dumber To. Guess what? It was really funny. And I shook a Farrelly brother’s hand! Yay to both,” wrote another.