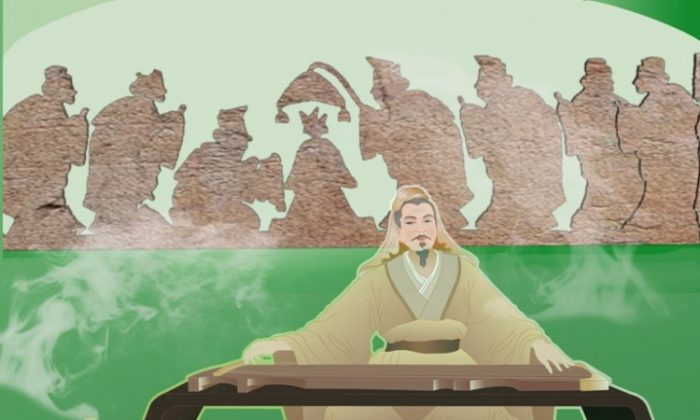 The Duke of Zhou, who created the benevolent Zhou rites, has been considered an exemplary figure for more than 2,000 years. (Catherine Chang/The Epoch Times)
China

Duke of Zhou: Model of Filial Piety and Benevolence

The Duke of Zhou, or Zhou Gong (周公) in Chinese, was the fourth son of King Wen (周文王) and a younger brother of King Wu (周武王).

In Chinese history, the Duke of Zhou is known as an exemplar of filial piety (respect for one’s parents and ancestors) and benevolence.

These virtues were evident from an early age. As talented as his brothers in childhood, the Duke of Zhou distinguished himself through his discipline in practicing filial piety and benevolence.

As an adult, he helped King Wu go eastward with their chariot troops to conquer the Shang Dynasty (商朝). The Shang ruler at the time, extremely unpopular, was a belligerent tyrant who lived a lavish lifestyle at the expense of the people.

With considerable assistance from the Duke of Zhou, King Wu defeated the Shang and their notorious ruler, who then committed suicide.

King Wu established the Zhou Dynasty (周朝) and adopted the generous and benevolent policy recommended by the Duke of Zhou: “keeping individuals in their stations rather than killing them.”

They released detained Shang residents and nobles and opened granaries to relieve the hungry.

They also encouraged influential and righteous nobles and members of the social elite to help found a subservient state with the son of the last Shang ruler.

The Duke of Zhou believed that Heaven bestows the divine right of ruling to those who are morally worthy. This belief is known as the “mandate of Heaven.”

In contrast to the previous Shang ruler, who created many harsh laws, the Duke of Zhou fashioned a series of humane policies to promote virtue and consolidate the newly established dynasty.

He introduced rites and music. He also endeavoured to “use virtue to enlighten the people and use punishment with prudence,” and to “honour virtue and care for the people.” These policies were highly praised and later followed by subsequent rulers.

In addition, the manner in which the Duke of Zhou treated and recruited talented individuals was regarded as a model by later officials.

The duke would stop anything he was doing in order to meet with a sage. For instance, he might stop washing his hair or eating a meal so that he could meet immediately with talented persons who had come to offer their proposals for how to govern the nation.

After King Wu died, the son and crown prince, King Cheng (周成王), succeeded to the Zhou Dynasty throne. As he was still a child, the Duke of Zhou acted as regent for seven years, never seeking to seize the throne for himself.

The duke instructed the young king on how to govern with virtue, and advised him not to indulge in sensual desires, comfort, playing, and hunting.

When King Cheng came of age, the Duke of Zhou relinquished the power to him as the rightful ruler, along with a consolidated territory.

In his later years, the Duke of Zhou continued his work on the introduction of rites and music and the improvement of institutions and regulations.

He developed a series of comprehensive rites, which contained detailed requirements for customs and laws ranging from national policy to individuals’ everyday behaviour.

The rites established a number of legal institutions. One was a patriarchal system to maintain the rule of the hereditary nobility, including that the consort’s eldest son would inherit the throne, while the other sons of the consort, concubines, and mistresses would be given titles.

Another institution was a feudal system to nominate and divide land among the royal family members. Still another was a system of rituals—ceremonies and procedures used for important national affairs.

The rites also included such matters of daily life as weddings and funerals, rites of passage, sacrifices, and so on.

Later, Confucian scholars compiled a special book of the rites of Zhou.

For over 2,000 years, the central virtues of the Zhou rites—benevolence (仁), righteousness (義), propriety (禮), wisdom (智), and faithfulness (信) (pronounced rén, yì, lǐ, zhì, and xìn)—have served as the norms of moral behaviour for the Chinese people.

The Zhou rites introduced by the Duke of Zhou have been passed down through the generations and are regarded as a treasure of Chinese culture. The rites defining marriage still maintain considerable influence on the Chinese people today.

The Zhou Dynasty (approximately from the 11th century B.C. to 221 B.C.) was the longest dynasty in Chinese history. It lasted 900 years before it was succeeded by the Qin Dynasty (秦朝).

King Wen, King Wu, Jiang Ziya (姜子牙), and the Duke of Zhou from the Western Zhou are the most well-known for making great contributions in Chinese history.

The Zhou Dynasty is considered the pinnacle of Chinese traditional culture. The Chinese ethical and philosophical systems Confucianism and Daoism (also written as Taoism) were developed during this period, deeply influencing future generations in China.