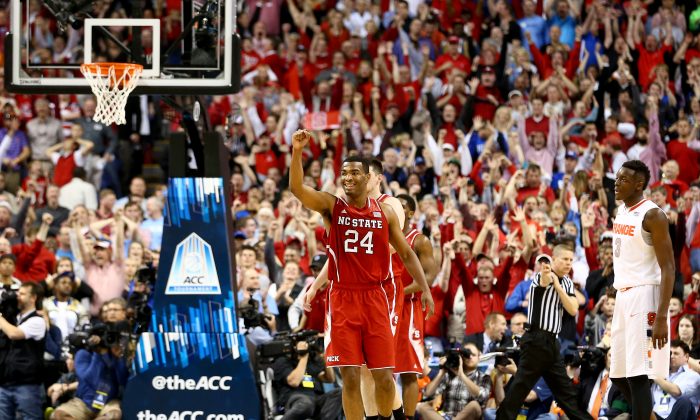 T.J. Warren #24 of the North Carolina State Wolfpack celebrates after defeating the Syracuse Orange 66-63 during the quarterfinals of the 2014 Men's ACC Basketball Tournament at Greensboro Coliseum on March 14, 2014. (Streeter Lecka/Getty Images)
College Sports

The N.C. State Wolfpack will take on the Duke Blue Devils in the ACC semifinals.

The basketball game will be played at the Greensboro Coliseum in North Carolina.

The game will be broadcast live on ESPN and the ACC Network while live streaming will be available on THEACC.com and ESP3.

The Wolfpack topped Syracuse 66-63 in a close win.

Whichever team wins will take on the winner of Pittsburgh-Virginia.

The championship game is slated for 1 p.m. on Sunday. It too will be broadcast on ESPN and the ACC Network.

See an AP story about the Wolfpack’s upset of the Orange below.

GREENSBORO, N.C.—C.J. Fair never looked comfortable for No. 11 Syracuse. It was a big reason why the Orange’s first Atlantic Coast Conference tournament ended after just one game.

Fair, the preseason league player of the year and the Orange’s leading scorer, finished with nine points on 3-for-16 shooting in the 66-63 loss to North Carolina State in Friday night’s quarterfinals.

Fair went 2 for 12 in the first half and things got no better for the 6-foot-8 senior after halftime.

“It seemed like a lot of … burden was on me because I didn’t perform like I usually do,” he said. “It’s tough, so I’ve got to try my best not to let this happen again.”

Fair was averaging 16.9 points and shooting 44 percent coming in and had been strong in his last two games against Georgia Tech and Florida State. Fair scored 50 points while making 21 of 38 shots (55 percent) in those games.

“I thought C.J. got the shots he normally makes,” coach Jim Boeheim said.

The seventh-seeded Wolfpack (21-12) blew a 10-point second-half lead but came through with two clutch baskets late to hold off the Orange (27-5).

Warren followed Turner’s tiebreaking 3 with a jumper to make it 64-61, then hit two free throws with 24.6 seconds left to keep the Wolfpack up three.

Syracuse had one wild final possession, missing six shots — including four hurried 3-pointers from Tyler Ennis, Trevor Cooney and Fair — to ensure its first trip to the ACC tournament would be a one-and-done stop.

It was a huge win for N.C. State’s NCAA tournament hopes and allowed to avenge a loss to the Orange last month on a last-second basket.

The Wolfpack will face No. 7 Duke in Saturday’s semifinals, marking the third time in as many seasons that N.C. State has reached Saturday at the ACC tournament under Mark Gottfried.

This win could help Gottfried also make it 3 for 3 when it comes to making the NCAAs, too.

Ennis scored 15 of his 21 points after halftime for Syracuse, which was unbeaten and ranked No. 1 in the country a month ago but has faded down the stretch. The tournament’s No. 2 seed had lost four of six coming into Greensboro, though Boeheim dismissed the suggestion that his team was in a slump.

That talk will probably grow louder with another loss heading into the NCAA tournament.

Warren, the ACC’s leading scorer and player of the year, finished 9 for 21 from the field but hit 10 of 12 free throws and grabbed eight rebounds. Fifth-year senior Jordan Vandenberg added 10 points for N.C. State, which led 28-25 at halftime then shot 52 percent after halftime.

The Wolfpack’s win against reigning champion Miami in Thursday’s second round set up the rematch the Orange, who was still atop the polls when they edged N.C. State 56-55 at the Carrier Dome on Feb. 15.

Syracuse won that after the Wolfpack committed a late turnover that led to Fair’s winning layup with 6.7 seconds left. There was also a much-discussed call in which officials waved off a basket from Warren while being fouled with 13.6 seconds left because the foul came before the shot.

This one came down the stretch just like before, but the Wolfpack didn’t let the lead slip away this time.