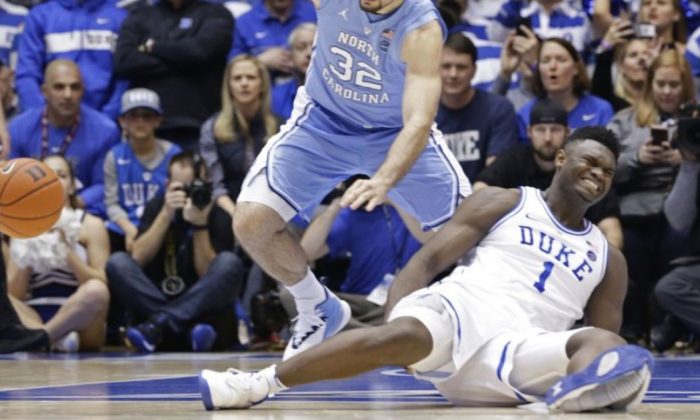 Duke's Zion Williamson (1) falls to the floor with an injury while chasing the ball with North Carolina's Luke Maye (32) during the first half of an NCAA college basketball game in Durham, N.C., Wednesday, Feb. 20, 2019. (AP Photo/Gerry Broome)
Entertainment News

Nike is working to contain a public relations disaster after Duke college basketball star Zion Williamson was injured after his Nike shoe malfunctioned.

In a key game against North Carolina, Williamson’s foot appeared to break out of his shoe. His foot slid on the floor and the shoe “exploded,” according to some observers.

Williamson is considered one of the top NBA prospects of the past several years.

Former President Barack Obama was in the audience and was seen mouthing, “His shoe broke.”

People on social media said that Nike, which has already been dealing with the fallout of signing former NFL quarterback Colin Kaepernick to a lucrative deal, is now dealing with another PR disaster.

Zion broke out of his SHOE 😨 pic.twitter.com/FnVkbZ5MOT

“We are obviously concerned and want to wish Zion a speedy recovery,” Nike told CBS Sports. “The quality and performance of our products are of utmost importance. While this is an isolated occurrence, we are working to identify the issue.”

This prompted shoe manufacturer Puma to issue a tweet before deleting it.

Duke coach Mike Krzyzewski wasn’t ready to talk about it after the game.

“I’d rather not talk about what we’re going to do,” Krzyzewski told The Associated Press, which reported that Williamson sprained his knee.

He said Williamson’s knee is stable, and the injury was mild.

Barack Obama pointing out the fact that Zion’s “shoe broke” will forever go down in history pic.twitter.com/pVFqEBgbFo

“I hope he’s going to be OK,” fellow player RJ Barrett said of Williamson. “We don’t really know where things are right now.”

Utah Jazz guard Donovan Mitchell wrote on Twitter that “something has to change” after the Duke standout’s injury.

“Again let’s remember all the money that went into this game…. and these players get none of it…. and now Zion gets hurt,” he tweeted.

Nike rep is cringing after that hi-top blowout that nearly injured Zion.

Nike’s stock went down by about 1 percent on Feb. 21 following the shoe malfunction.

“It’s already all over the world while we’re still watching the game he got hurt in,” said veteran shoe executive Sonny Vaccaro, Yahoo Sports reported. “They’re going to show it until we die.”

“If I’m the shoe company that had the shoe on the kid tonight,” Vaccaro added, “I’m praying to God that everything is OK physically.”

“He’s the most valuable player to come out of high school or college since LeBron James, without question,” Vaccaro said.

“All they want to hear about is Zion,” said a shoe company source about him. “There’s no silver. Zion is the gold.”