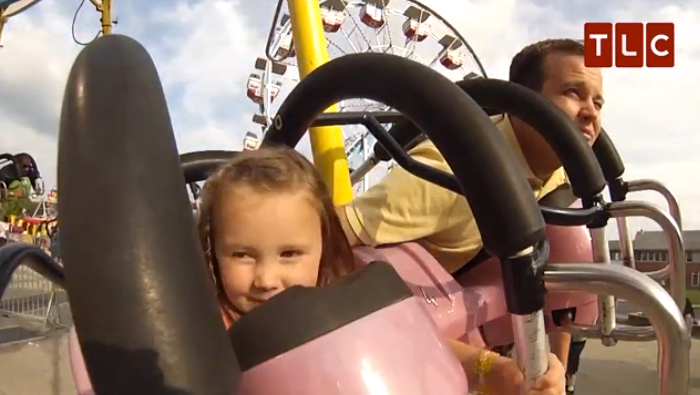 The 19 Kids and Counting show has gotten some new episodes, and one will be airing on Tuesday night.

The episode, titled DC Duggars Hit the Road, features Josh Duggar, his wife Anna, and their three children heading to Chicago in an RV to visit Anna’s sister Priscilla and her husband David for a special party.

“Along the way, they’ll visit a series of quirky stops, but will RV issues put a damper in their trip?” according to the description.

A sneak peek video shows that Josh and his family stopped off at an amusement park on the way.

“After a little while, Josh was like ‘okay, I’m not feeling too well, let’s go do something else,'” Anna said.

They went to look for bizarre food, and Josh got a doughnut burger.

“If you’re going to consume a hamburger and eat that many calories, why not put a doughnut on top of it?” Josh said, smiling.

The Pal-Item also revealed that Josh’s family stopped in Richmond, Virginia on the way to Chicago.

Richmond Furniture Gallery co-owner Roger Richert, who wasn’t allowed to discuss the trip until this week, said that TLC producers contacted him and then the family rolled through.

“It was quite fun to watch,” he said. “It was cool to even have them want to stop.”

Richert, who said the young children climbed all over the furniture, isn’t sure if the store will be part of the episode.

The episode airs at 9 p.m. EST; at 8 p.m., a rerun of Jessa’s engagement episode will air.