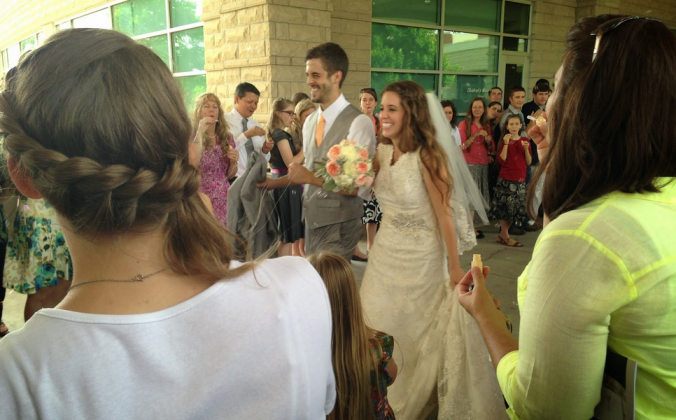 A report is saying Jessa Duggar, a member of the Duggar clan on “19 Kids and Counting,” might be engaged or even  “secretly married” to Ben Seewald.

The “Jessa Sewald” part is what was most striking, sparking speculation that she might be married.

According to a press release from TLC, Jill and Derick Dillard’s wedding will be featured in the upcoming season, which premieres Sept. 2 at 9 p.m.

“Also this season, Jessa and Ben continue to grow closer as their courtship takes an unexpected turn when Ben makes a move to live closer to Jessa. Jim Bob and Michelle celebrate 30 years of marriage as Jill and Derick prepare their new home together with the help of the family. The newly engaged couple also tends to Derick’s mom Cathy as she bravely battles cancer,” reads a press release.

Referring to Jill’s wedding, it also adds: “Jim Bob and Michelle start the emotional journey of giving away their first daughter in marriage as Jill and Derick plan their rapidly approaching nuptials. From dress shopping to cake tasting, it’s all hands on deck as the engaged pair prepare to say their “I dos” in front of more than 1,000 of their closest friends and family.”

According to the family’s blog a few weeks ago, Sierra was one of the wedding planners.

“At the very beginning, we had talked about it, and I told her, ‘If you want help with it, I would love to help you.’ And she’s like, ‘Perfect, yes! Okay!'” Sierra said, according to the blog.

Sierra had about three months to plan.

“I encouraged there to not be a whole lot of Duggar helpers. It’s such a special time that if you’re not careful, you can forget that it’s a special time, and you miss out on the fun joy of being a family when your daughter’s getting married. So if we had any questions, we really deferred to the oldest sisters or to Michelle,” she added.

“[Jill and Derick] were a dynamic team. I just love watching a bride and groom know what they want and just needing to translate that to a wedding coordinator and then have the wedding coordinator execute it. They really were that awesome team that said, ‘Here’s what we want. Can we do it?’ So we did it.”