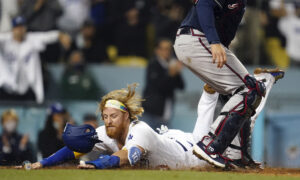 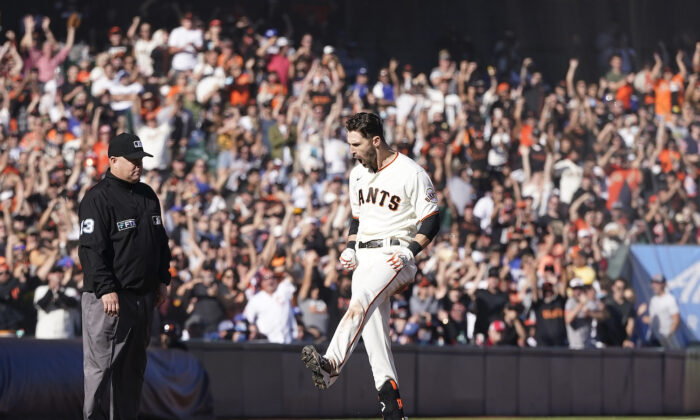 SAN FRANCISCO—If the Dodgers and Giants just provided a glimpse of a possible playoff series, an October matchup between these rivals could be one for the ages.

“I can imagine that would be the most intense postseason series I’ve ever been a part of,” San Francisco first baseman Brandon Belt said.

The September showdown wasn’t half bad, either.

Steven Duggar hit a two-run triple after being called up earlier in the day, Belt homered, and the Giants wrapped up a key weekend series against Los Angeles with a 6-4 win on Sept. 5 to take a narrow NL West lead again.

San Francisco did it with a second straight bullpen game, and did it watching Albert Pujols launch another home run at age 41.

“It’s just no flinch, up and down the lineup, the bullpen,” Duggar said. “Just go about our preparation and every guy pulls their weight. It’s just a lot of fun, it’s a lot of fun to come to the field, strap it on and go play.”

Pujols hit career home run No. 678 with a pinch-hit, two-run drive in the ninth off Giants closer Jake McGee, who allowed Max Muncy’s single one out later then retired Mookie Betts on a called third strike. The final out went to replay and was confirmed after right fielder Mike Yastrzemski caught Justin Turner’s fly against the netting in foul territory.

“We lost a series, we got beat and we could have done things differently, obviously which could have been the difference in the series,” Dodgers manager Dave Roberts said. “We’ve got to find a way to quickly turn the page and we’ve got a ballgame to win tomorrow.”

Brandon Crawford had an RBI double and Darin Ruf singled home a run in the second as San Francisco beat Walker Buehler (13-3) for the first time. He had gone 7-0 with a 1.83 ERA over his initial 12 outings and 10 starts against the Giants. The right-hander hadn’t allowed more than five runs since giving up six to Colorado on Sept. 2, 2019.

“The worst I’ve thrown in a long time,” he said.

The Giants tagged Buehler for a season-high six runs on seven hits over three innings in the final regular-season matchup between the rivals. San Francisco (87-50) now holds a one-game division lead and owns any tiebreaker—such as home-field advantage if there’s a one-game playoff if they finish with the same record—with the defending World Series champions (86-51) after winning the season series 10-9.

And here’s how close these clubs played in 2021: The Dodgers outscored the Giants head-to-head 80-78.

Dominic Leone pitched a perfect inning in the first start of his career in a second straight bullpen game for San Francisco after the Dodgers relied on relievers in the series opener Friday night when David Price couldn’t go.

José Álvarez entered for the second and surrendered Will Smith’s RBI single before winner Zack Littell (2-0) relieved and struck out two.

“It really felt like a playoff atmosphere out there,” Belt said, “… It’s crunch time.”