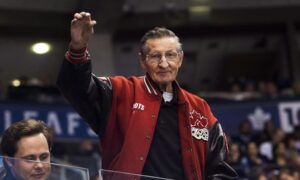 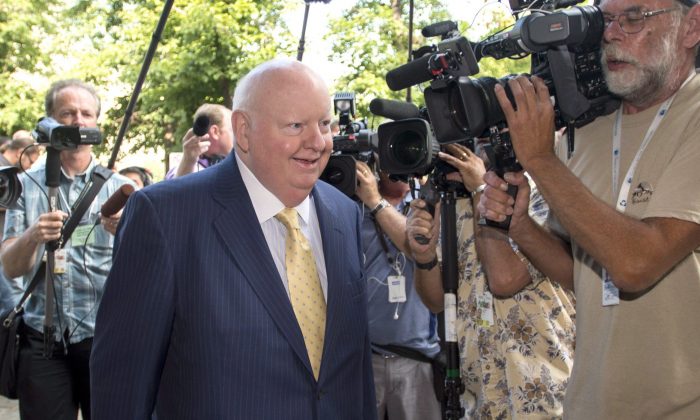 Former Conservative senator Mike Duffy arrives at the courthouse in Ottawa on Aug. 19, 2015 for the sixth day of testimony by Nigel Wright, former Chief of Staff to Prime Minister Stephen Harper. The Duffy fraud trial is having an impact on the election campaign, with courtroom revelations more closely linking Harper’s chief of staff, Ray Novak, to a $90,000 payment to Duffy by Wright. (The Canadian Press/Justin Tang)
Canada

OTTAWA—Prime Minister Stephen Harper’s political opponents are using the Mike Duffy trial to try to connect the prime minister to the controversial expense payout given to Duffy by Harper’s former chief of staff.

While campaigning Wednesday, Harper said he wasn’t going to discuss the latest controversial revelations from the trial the previous day that more closely linked Ray Novak, his current chief of staff, to a $90,000 payment to Duffy in 2013.

In the face of that evidence, Harper reiterated his core message on the topic as he continued to face questions. He maintained only two people are responsible for wrongdoing: Duffy over his Senate expense claims and former chief of staff Nigel Wright, who paid them.

But the leaders of the Liberals and NDP used the trial to cast doubt on that narrative.

Novak has been a loyal political lieutenant to Harper since his days in opposition. He was elevated to chief of staff in 2013, when it was revealed that Wright personally covered Duffy’s expenses. Harper had wanted Duffy to repay them himself.

During Wright’s six days in the witness box at Duffy’s fraud trial, it emerged that Novak was informed about Wright’s plan to repay the expenses. This came out in emails and then in a statement the prime minister’s former lawyer made to the RCMP that was read into evidence.

NDP Leader Tom Mulcair expressed doubt about the PM’s knowledge, or lack thereof, during a campaign event in Surrey, B.C.

“If Mr. Novak knew, Mr. Harper knew. So, one plus one makes two,” said Mulcair.

“This comes down to whether Canadians can trust the prime minister and his office,” Trudeau said.

New Democrat ethics critic Charlie Angus has sent a letter to RCMP Commissioner Bob Paulson asking whether Wright ought to face criminal charges and whether a dozen Conservative staffers ought to be investigated in light of what’s emerged from the trial.

In the letter, Angus said that Wright’s testimony “has painted a picture of numerous senior staff in the Prime Minister’s Office working together to try and cover up this scandal.”

“Evidence at the trial points to over a dozen people—including the Prime Minister’s current Chief of Staff, Ray Novak—involved in a plan to make a secret payment to a sitting senator, have him make intentionally misleading statements to the public, and interfere with an independent audit,” Angus wrote.

In Toronto on Tuesday, Harper was asked by reporters why he continued to tell the House of Commons that Wright was the only staffer in his office to know about the $90,000 payment that Wright gave Duffy to cover his expenses.

“I’ve answered according to the information I had,” Harper replied. “As you know, Mr. Wright made some subsequent statements and so I of course corrected the record. And that was over two years ago.”

At that campaign event, Harper’s supporters got riled up, heckling reporters who tried to ask about Duffy at the prime minister’s press conference and later hurling profanity-laced insults at them as they departed.

At one point, Harper had to intervene to allow a reporter to ask a question about the Duffy case after one heckler yelled: “Ask questions on the topic at hand.”