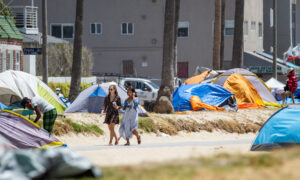 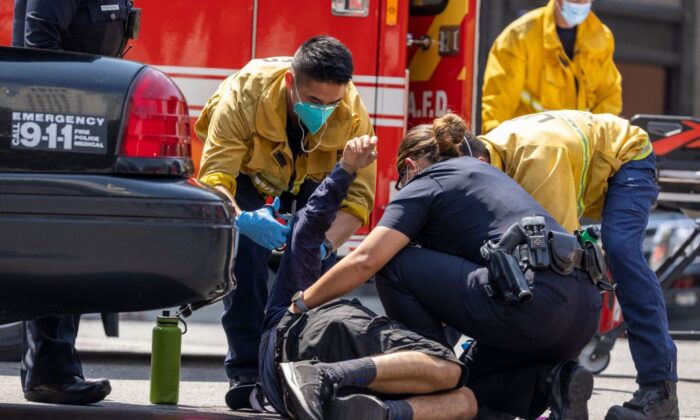 Police and EMTs assist a man who was injured during fights between protesters against vaccine mandates and counter protesters during a rally near City Hall following the Los Angeles City Council vote earlier this week to draw up an ordinance to require proof of vaccination to enter many public indoor spaces, in Los Angeles on August 14, 2021. (David McNew/AFP via Getty Images)
Southern California

LOS ANGELES—A man who was stabbed during dueling demonstrations in downtown Los Angeles over COVID-19 vaccine mandates has been released from the hospital, police said Aug. 15.

Spokesman Mike Lopez of the Los Angeles Police Department had no further information about the victim, and said Aug. 15 that no arrests have been made in Aug. 14’s violence outside City Hall, where many punches and objects were thrown between a group defending vaccine and mask mandates and opponents who think they infringe on personal freedom.

Supporters of mandatory vaccinations, which are increasingly being required, gathered at 1 p.m. Aug. 14 for a “No Safe Space For Fascists” rally, followed one hour later by a “Choose Freedom March” against “medical tyranny.”

Video from the scene posted on social media showed protestors fighting with each other on the sidewalk near First Street. Late in the afternoon, the LAPD declared an unlawful assembly.

“We are aware of one male that was stabbed and is being treated by LAFD,” the LAPD tweeted at 3:15 p.m. Firefighters also responded to the gatherings.

“We made one transport to a hospital (from the demonstrations) but I don’t have any patient condition information,” Los Angeles Fire Department spokeswoman Margaret Stewart said.

The wounded man collapsed at the intersection of First and Spring streets after being stabbed and at least one LAPD officer was seen trying to stop his bleeding before firefighters arrived.

Veteran reporter Frank Stoltze of KPCC and LAist said he was attacked in the park outside City Hall. It was unclear who attacked Stoltze, but LAPD Capt. Stacy Spell told Los Angeles Times reporters at the scene that a police report had been taken.

Stoltze later posted a message on Twitter saying, “Something happened to me today that’s never happened in 30 years of reporting. I was shoved, kicked and my eyeglasses were ripped off my face by a group of guys at a protest outside City Hall.”

Reporter and podcaster Tina Desiree Berg posted photos and video of herself being attacked by a man who can be seen lunging forward and pulling down her mask.

Berg posted “I was just attacked with others” at the top of a lengthy Twitter thread showing photos and video of herself and others being approached by angry protesters.

“We are on scene to maintain order after a fight broke out between Antifa and people gathered for the permitted event,” the LAPD posted on Instagram. “No arrests have been made but investigation is ongoing.”

The Los Angeles City Council voted last week to have the city attorney draw up an ordinance requiring proof of at least partial vaccination to enter many public indoor spaces in the city, including restaurants, bars, gyms, concert venues, movie theaters and retail establishments.

Los Angeles Councilman John Lee has said he will not support the ordinance, saying it would be a divisive move.

“At a time when we need to move forward together to combat the virus, this measure may only deepen divides without addressing the heart of the matter—getting people vaccinated,” he added.

The Los Angeles County Board of Supervisors is gathering advice from experts over the next two weeks for a possible similar mandate.

On Aug. 13, interim Superintendent Megan K. Reilly announced that all Los Angeles Unified School District employees will be required to be fully vaccinated against COVID-19 by Oct. 15. The district previously mandated only weekly testing for all students and staffers, regardless of vaccination status.

That testing requirement will remain in place. Gov. Gavin Newsom on Aug. 11 announced a statewide requirement for all teachers and school employees in the state to show proof of COVID-19 vaccination or submit to weekly testing. The Long Beach Unified School District, the second-largest district in Los Angeles County, announced the same policy last week.

Los Angeles County is requiring its employees to get vaccinated, and many large private employers are doing the same.

And AEG, owner of many of the Southland’s major concert venues, said Aug. 12 that fans will have to be vaccinated to attend shows at its facilities, including the Roxy, the El Rey Theatre, the Fonda Theatre, the Shrine Auditorium and the Coachella Music & Arts Festival in Indio.