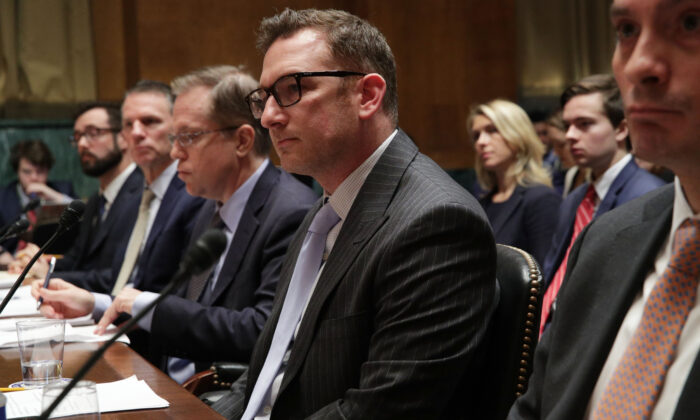 Gabriel Weinberg, CEO and founder of DuckDuckGo, in Washington for a congressional hearing in a file image. (Alex Wong/Getty Images)
Tech News

The search engine DuckDuckGo has begun penalizing sites linked to “Russian disinformation” amid the Russia–Ukraine war, according to the company’s CEO.

“Like so many others I am sickened by Russia’s invasion of Ukraine and the gigantic humanitarian crisis it continues to create,” Gabriel Weinberg, the CEO, wrote on social media.

“At DuckDuckGo, we’ve been rolling out search updates that down-rank sites associated with Russian disinformation,” he added.

DuckDuckGo is also placing boxes with information at the top of the search results page “to highlight quality information for rapidly unfolding topics,” Weinberg added.

DuckDuckGo is an alternative to Google that has been growing in popularity in recent years in part because it doesn’t track users. Weinberg has in the past promised “unbiased results” as part of his pitch to people to switch from Google.

Some users quickly questioned the CEO’s update, including Tom Fitton, president of the Judicial Watch nonprofit.

DuckDuckGo, “contrary to its implicit promises to the contrary, is now in the censorship business,” he wrote on Twitter. “Are there any search engines that respect users?”

“Today, you are removing Russian disinformation Tomorrow you will be removing genuine protests,” another user wrote.

DuckDuckGo did not respond to a request for comment.

Weinberg later responded to some of the critics.

Google has been placing Russian state media posts lower on its results since 2017.

“We don’t want to ban the sites. That’s not how we operate. I am strongly not in favor of censorship. I am very strongly in favor of ranking. It’s what we do,” Eric Schmidt, the CEO of Google parent company Alphabet, said at the time.

Russia Today, one of the outlets, pushed back then, saying, “His colleagues admitted three weeks ago that RT did not violate any rules of the platform.”

Around the same time, Katie McInnis, a senior public policy manager for DuckDuckGo, told a congressional panel that the company suspended its relationship with Yandex, a Russian search engine.

“In light of Russia’s assault on democracy and Ukraine, we have paused our relationship with Yandex,” McInnis told the House Committee on Energy & Commerce. “The index was used to provide traditional links, meaning non-news links, in Russia and Turkey.”