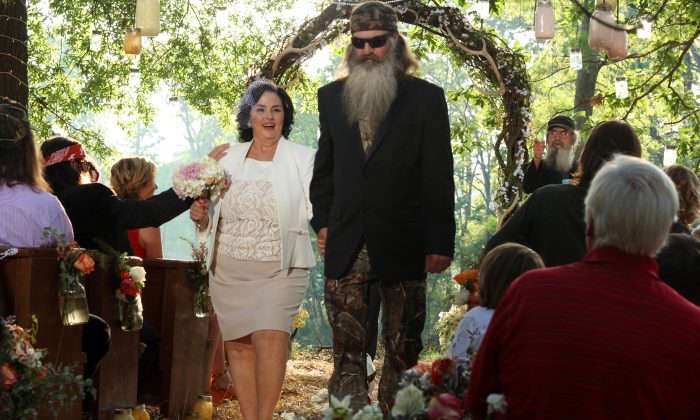 This publicity image released by A&E shows Miss Kay Robertson, left, and Phil Robertson renewing their vows in a scene from the the season 4 premiere of "Duck Dynasty." A&E says nearly 12 million birds of a feather caught the season premiere of the hit unscripted series on Wednesday, Aug. 14, 2013. (AP Photo/A&E)
Entertainment

‘Duck Dynasty’ Phil Robertson’s Wife, Miss Kay, Explains Why She Didn’t Leave Him After He Cheated and Abused

In a recent Q&A with Fox News, Kay Robertson, the infamous wife of Phil Robertson talked about her struggles sticking with Robertson in the early days of their relationship.

Miss Kay, as she’s referred to on the show “Duck Dynasty,” said that the worst advice someone gave her was to leave her husband.

“I attribute a lot of [sticking with Phil] to my grandma. She was such a stickler for staying with your marriage. She always used to say, ‘You have to fight for your marriage.’ Of course I was someone that never believed I would have to do that because I read way too many books that ended with, ‘And they lived happily ever after.’…When I say, ‘I love you,’ it’s for life,” Miss Kay told the media.

She then went on to explain that her strong faith helped her through the 10 years that Phil Robertson did “a lot of bad things.” Some of those bad things included infidelity, and drinking, which would end up with Phil being “mean and very cruel with his words.”

“When I first fell in love with Phil there were so many good characteristics about him and I knew he had a good heart. I saw the change in him when he ran around with people at college. He made the bad choices to run with those people,” Kay Robertson said.