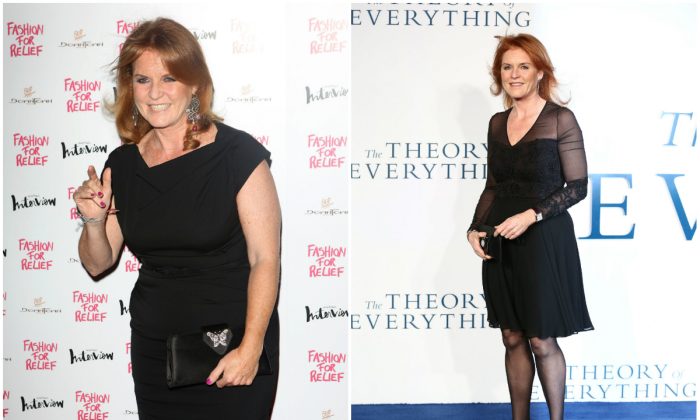 Left, Britain's Sarah, Duchess of York, poses as she arrives for the UK premiere of the film 'The Theory of Everything' in London on December 9, 2014; and right, Sarah Ferguson attends Fashion for Relief a Charity Dinner on August 9, 2012 in London, England. (Getty Images)
Europe

Ferguson, 54, battled public criticism for her body size for quite some time before being motivated to lose some serious weight.

Ferguson said she resolved to take action when she weighed herself and found that she weighed almost the same as when pregnant with her first daughter Princess Beatrice, who is now 26.

“That’s what really frightened me,” she revealed earlier this year.

Ferguson took to the Swiss ski resort of Verbier to undergo her transformation, which included cutting out sugar from her diet while sticking to a exercise plan.

“I used to be so angry,” she told Hello magazine.

“I believed I was never going to lose the weight, that I had lost control. I couldn’t fit into any of my clothes. I was just drowning in eating, drowning in food.”

The transformation–including losing more than 50 pounds–started earlier this year but new pictures of Ferguson at the United Kingdom premiere of The Theory of Everything movie show just how much weight she has dropped.


“Sarah looked fantastic,” an onlooker told the Express. “Even among celebrities, there is a calmness and confidence about her which is amazing.”

Some royal observers have labeled the new look “the resurrection of Brand Fergie.”

And the weight loss isn’t the only good news for Ferguson.

After spending years divorced from Prince Andrew but still living together, sources said the pair are planning on getting remarried.