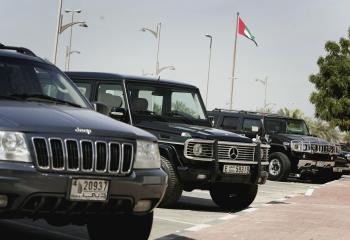 DUBAI—The highfliers of Dubai are increasingly selling up their Porsches or Ferraris in the wake of the financial crisis, figures reveal.

Sales of luxury cars at the UAE online auction site Dubizzle have increased by 115 per cent over the last month, according to statistics obtained by The Epoch Times.

J.C. Butler, owner and co-founder of the popular website, said that he was surprised by the jump.

“It’s most unusual. At first we thought that it was because of an increase in the total listings of cars, but then we checked and that has only increased by 3.6 per cent since last month.

“Lots of people seem to be tightening their belts amid the credit crunch. Perhaps they lost their shirts on the stock market and they needed to sell off their assets.”

Butler reported that from October to November 2008 there were 306 luxury cars listed on the website. Between June and July there were only 142.

The Dubizzle statistics match with anecdotal evidence obtained from used car dealers. One such dealer said that where he once received only one Porsche a day, he now receives around eight.

However, according to Hussam Khaled, General Manager of Dubai-based Target Auto, fewer people than ever are buying luxury cars.

“People will not buy cars that are over Dh80,000, where before this used to be no problem,” he said. “This month has been very quiet. As we know, there are more people here who are dealing with the stock market so they know what is happening with the economy. Those who can afford to buy these cars, aren’t doing so anymore.”