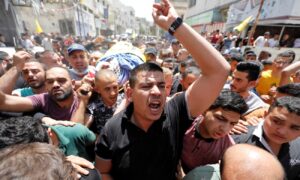 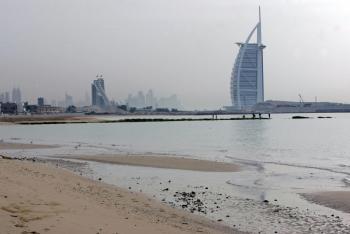 Last month, a 300-meter strip of Jumeirah Beach was closed as a result of pollution being pumped through underground pipes from storm drains in the city’s industrial area of Al Quoz. (Karim Sahib/AFP/Getty Images)
Middle East

Dubai Authorities in Pollution Clean Up of Tourist Beaches

DUBAI—Fears over the level of pollution on Dubai’s iconic Jumeirah Beach have prompted authorities to plough Dh3 billion into improving sewage disposal.

Last month, a 300-meter strip of beach was closed as a result of pollution being pumped through underground pipes from storm drains in the city’s industrial area of Al Quoz.

However, Dubai Municipality officials issued a statement on Sunday, saying that the water on the beach is safe for swimming.

“At present, people are swimming in all beaches of Dubai including the beach in question,” said Salem Bin Mohammed Mesmar, Assistant Director General of the department of Health, Safety and Environment Control.

He added that the level of E.Coli in the water was within permitted levels of less than 100MPN (maximum probable number).

“You know straight away when a tanker has let go. The smell is very bad indeed,” he said.

As many as 3,000 tankers form long queues outside the sewage treatment plant at Al Aweer every day and some drivers have resorted to dumping waste in storm drains across the emirate. Many of those flow directly into the sea.

The Municipality has so far caught 208 tanker drivers dumping waste into storm drains and fined them Dh100,000 each.

In addition, a new Dh1.55 billion sewage disposal plant in Jebel Ali will be ready in August.

Hussain Nasser Lootah, Director General of the Municipality, said he hoped that the new plant will dissuade tanker drivers from dumping waste illegally. “There should be much shorter queues at the treatment plants,” he said.

Lootah also announced that the government had approved a Dh3 billion budget for the Municipality to improve sewage disposal in the emirate.

Commenting on the scale of the investment he said, “Providing a good service doesn’t come for free.”