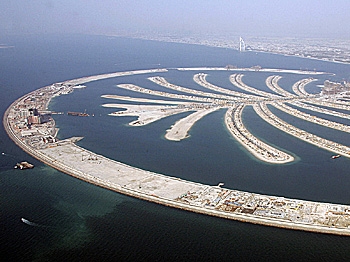 The man-made palm-shaped islands in the oil-rich Gulf emirate of Dubai is not sinking, according to state-owned developer Nakheel. (Karim Sahib/AFP/Getty Images)
Middle East

Stephen Jones
View profile
Follow
biggersmaller
Print
DUBAI, United Arab Emirates—Its economy may be floundering under the weight of US$80 billion worth of debt, but the famous artificial islands of Dubai will not sink any time in the future, officials have said.

Nakheel, the state-owned developer, furiously hit back on Wednesday at suggestions that its US$12 billion signature Palm Jumeirah Island is disappearing into the waters of the Arabian Gulf, at a rate of almost 1 cm (0.4 inches) a year.

The claim was made by European ground survey company Fugro NPA, who conducted five years of research into the movement of the Palm Island after it was built.

Shaun Lenehan, head of Environment at Nakheel, said the claim was "wholly inaccurate."

“The integrity of all buildings, utilities, and infrastructure on Palm Jumeirah are testament to the fact that there has been no subsidence,” he said.

“Any settlement of the ground, even as little as 5mm [0.2 inches], would generate obvious physical manifestations including masonry cracking, leaking pipes, broken windows, and so forth."

Nakheel has attracted its fair share of bad press in recent weeks. It is a subsidiary of Dubai World, the beleaguered state-owned conglomerate at the center of a $26 billion debt crisis.

The latest fallout came after news agency Zawya Dow Jones quoted Adam Thomas, InSar surveying project manager at Fugro, as saying that the island was sinking at a rate between 5mm – 1cm per year.

"We're seeing across the island at a number of locations ground is moving downwards," he was quoted as saying.

However the company issued a clarification later in that day, correcting the way that Thomas was represented by the regional newswire, which belongs to the same parent group as the Wall Street Journal.

"Settlement is a normal occurrence following construction," the company said in a statement. "No conclusion can be drawn about the long term.

"The point displacements measured at Palm Island in the first few years following construction (less than a centimeter per year) are well within the expected natural settlement range for such a large structure and such settlement would be factored into the engineering design of the island."

NPA Satellite Mapping—which is owned by Fugro—carried out its study on the Palm Jumeirah between 2003 and 2008.

The Palm Jumeirah was dredged from the bottom of the sea and has become a landmark development in Dubai, offering residents luxury beachfront villas.

A fireworks display lit up all fronds of the palm-shaped island last year at the star-studded opening ceremony of the five-star Atlantis hotel at the tip of the development.

It is the only offshore development by Nakheel to have been fully completed. Others, including two more Palm islands and a series of small islands arranged in the shape of a world map, have been shelved—although the dredging is complete.

Lenehan said that even if water levels rise, the Palm Jumeirah is still not at risk of flooding.

“Palm Jumeirah is not any more threatened by flooding than any other major city,” he added.