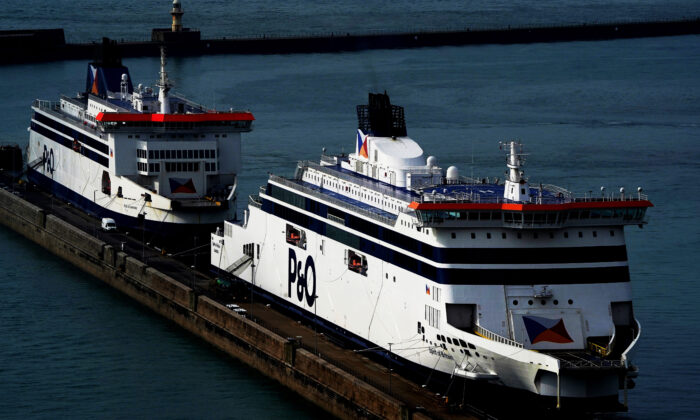 The P&O Ferries vessel Spirit of Britain (R) moored at the Port of Dover in Kent, England, on April 13, 2022. (Gareth Fuller/PA)
UK

The Dubai-owned company P&O Ferries will not face any criminal action over its decision to sack nearly 800 British workers without notice, the Insolvency Service has said.

P&O Ferries, which was bought by Dubai-based logistics giant DP World in 2019, sparked outrage on March 17 when it fired 800 seafarers without any prior notice and replaced them with cheaper agency workers, citing £100 million ($132 million) year-on-year loss.

But the government agency said on Aug. 19 that it has decided not to commence criminal proceedings because “there was no realistic prospect of a conviction.”

The decision was made following a “full and robust” investigation, which was reviewed by an independent senior prosecution lawyer, said a spokesperson.

The agency said a civil investigation into the mass sackings is still ongoing.

During the hearings on the mass sackings, the business admitted to Parliament that it had broken the law that would have forced them to give notice of the firings. This was because no unions would have accepted its new proposals, bosses said at the time.

A UK government spokesperson told the BBC: “In sacking 800 dedicated staff on the spot, P&O Ferries not only acted callously but failed to uphold the high standards we expect of British businesses.

“Given their appalling behaviour, it’s very disappointing that the company will not face criminal proceedings.”

Mark Dickinson, general secretary of Nautilus International, a union that represents maritime professionals, said the Insolvency Service’s decision will be a blow to the “discarded” workers.

Labour accused the government of breaking its pledge to hold P&O to account and warned of a repeat of the mass firing.

Shadow employment rights minister Justin Madders said that ministers had opened the door for other businesses to copy P&O’s practices.

“This outcome is a sign of a broken economy under the Tories and the fundamental weakness of employment protections under their government,” he said.

Huw Merriman, a Conservative MP who chairs the transport committee in the House of Commons, called on the government to legislate to prevent a repeat of the scandal.

He told the BBC: “The law isn’t strong enough and as MPs we need to legislate to make sure that it is.”

He said it would be a disgrace if Parliament does not “fix it and stop it from happening again.”