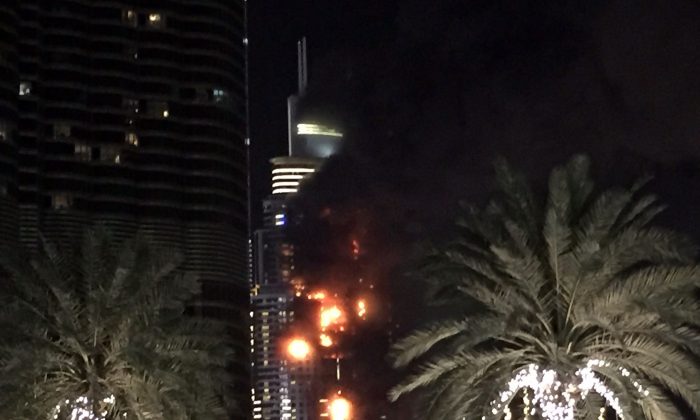 A fire runs up some 20 stories of a building in Dubai, United Arab Emirates, Thursday, Dec. 31, 2015. The fire broke out Thursday in a residential building near Dubai's massive New Year's Eve fireworks display. It was not immediately clear what caused the fire near the Burj Khalifa, the world's tallest skyscraper at 828 meters (905 yards). (AP Photo/Jon Gambrell)
US

Dubai New Year Fireworks Kick Off While Nearby Tower Blazes

DUBAI, United Arab Emirates  — A massive fireworks display kicked off for New Year’s at the world’s tallest tower in Dubai, while plumes of smoke billowed in the air from a fire raging at a nearby luxury tower.

Tens of thousands of people whistled and cheered at the show taking place at the Burj Khalifa skyscraper as teams of firefighters were working to put out the blaze that had engulfed a 63-story luxury hotel and residential building. Just minutes before the fireworks began, large explosions could be heard from inside the burning building, which was cloaked in thick black smoke. It was not clear what caused the blasts.

At least 14 people were slightly injured and one person suffered a heart attack from the smoke and over-crowding during evacuation late Thursday, according to Dubai Media Office. The statement said another person was moderately injured, without elaborating further. No children were among those injured, it said.

Around 1 million people had been expected to gather around the Burj Khalifa to watch the fireworks. Dubai’seconomy depends heavily on tourism, and New Year’s is one of the busiest seasons, drawing people from around the world to watch the fireworks that the emirate puts on at the world’s tallest tower, as well as the sail-shaped Burj Al Arab and over a man-made palm-shaped island.

Organizers had installed 400,000 LED lights on the Burj Khalifa and used some 1.6 tons of fireworks for the seven-minute extravaganza. Two years ago on New Year’s, Dubai broke the world record for the largest fireworks display.

The fire engulfed the Address Downtown, one of the most upscale hotels and residences in Dubai, which was likely to have been packed with people because of its clear view of the 828-meter (905-yard) tall Burj Khalifa.

The hotel towers over the Souq Al Bahar, a popular shopping area with walkways that connect to the Burj Khalifa and the Middle East’s largest mall, the Dubai Mall.

It was not immediately clear what caused the fire, which ran up the 63-story building. The Address is a 991 foot-tall (302-meter) skyscraper that has 626 luxury apartments and 196 hotel rooms, according to Skyscraper Center, which tracks such buildings.

Dubai’s Media Office wrote on its official Twitter account that four teams of firefighters were working to put out the blaze. They said the fire appears to have originated on a 20th floor terrace.

Nearly an hour after the fire began, some onlookers began to leave while others stood, pressed against crowd barricades, watching the blaze. Among them was Chris Browne, a tourist from London, who watched with her husband, Stephen, standing behind her. They said they hoped no one was injured.

Standing nearby, Stuart O’Donnell, a British intensive care nurse who works in Dubai, said he was worried for those inside the building as it was in a prime location to watch the fireworks display.

“You feel sad for the people inside… It spread so quickly when it started,” he said.

He and others in the crowd wondered what had started the blaze. “I do feel suspicious of when a fire breaks out on New Year’s Eve,” he said.

The Dubai Media Office said that Dubai’s tourism department would provide guests evacuated from the building with alternative hotel accommodation.

After the fireworks show, Girlie Omilda, a Filipina who works in the aviation industry in Dubai, said she was glad to have seen the fireworks, even as the tower continued to burn. She too was concerned about threats from extremists like the Islamic State group. She said Dubai’s large expatriate, non-Muslim population made the city a tempting target.

“Sometimes it makes me feel unsafe,” she said.