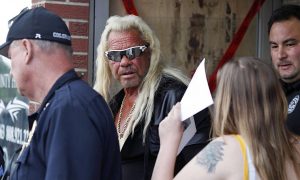 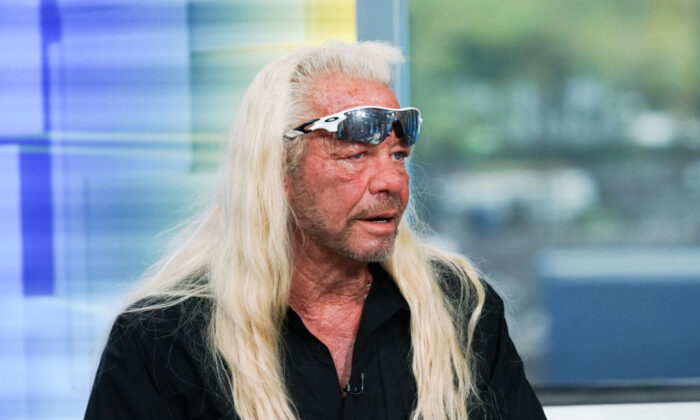 The reality star posted an exclusive interview with The U.S. Sun on his verified social media accounts in which he revealed that he has gotten engaged to girlfriend Francie Frane.

His tweet included photos of the couple together, showing off the engagement ring.

According to the story, Chapman, 67, “got down on one knee and popped the question in a romantic candlelit proposal at their home in Colorado.”

The news comes weeks after Chapman reportedly confirmed they were dating.

His wife, Beth Chapman, died in June 2019 after battling cancer.

They starred in the popular reality series “Dog the Bounty Hunter” and raised 12 children together, while splitting their time between homes in Hawaii and Colorado.

The pair and their son Leland also starred in CMT’s reality series, “Dog and Beth: On the Hunt,” for three seasons from 2013 to 2015.

In September 2017, the couple used the official Facebook account to confirm a report that she had been diagnosed with Stage 2 throat cancer.

They later revealed during the A&E special, “Dog & Beth: Fight of Their Lives,” that the cancer had been removed and she was cancer-free.

But the disease returned in 2018 and they documented her struggle on their WGN America series, “Dog’s Most Wanted.”

In February, Chapman appeared to propose to his longtime assistant and a friend of his wife, Moon Angell, during an appearance on the “Dr. Oz” show.

He later explained that they were not romantically involved and that it was loneliness which drove his actions.

“It seems like yesterday [his wife dying] and they say ‘time heals all wounds.’ No, it doesn’t,” he told “Entertainment Tonight.”

Chapman, 66, told People magazine in late August that he and his late wife had discussed the possibility of him moving on before she died from cancer in late June 2019.

“I probably will do that, and I told her that,” Chapman said of dating. “What deal we said is I will never take ‘Beth’ off my chest, I have her name here. And I will never get married.”

He continued, “And she said to me, ‘We are human, okay?’ And probably the same thing I’d say to her.”

In another interview with Entertainment Tonight, Chapman said that Beth simply told him to let go, as she was preparing to die in late June.

He told the news outlet: “And I didn’t even make a decision, I almost said, ‘I can’t.’ Before I could say, ‘All right,’ she couldn’t breathe, and I called the ambulance … But every day, she talked as if she was not there. ‘Here’s what to do with this, here’s what to do with that. Don’t keep running your mouth. When they ask you a specific question, just answer that.'”