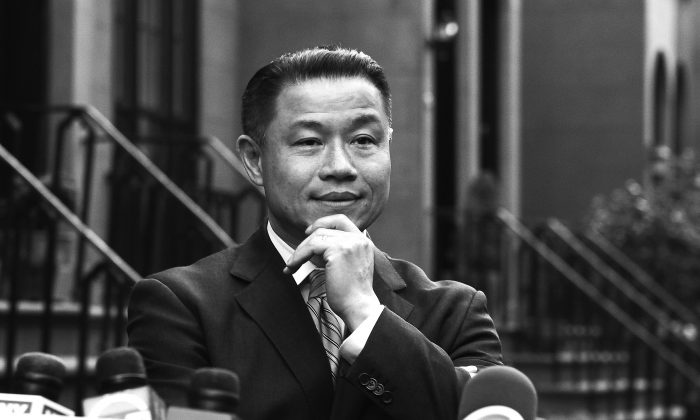 New York City Comptroller John Liu speaking at a press conference in Brooklyn May 2 after two of his aides were found guilty of attempted wire fraud in conjunction with his comptroller campaign from 2009–2011. Liu is also a NYC mayoral candidate. (Samira Bouaou/The Epoch Times)
John Liu Unmasked

Arzt had a contract to lobby on behalf of Structured Employment Economics Development Corp from August 11, 2011, to December 31, 2011, one of whose targets was the Comptroller’s office, for which he received $7,500 in compensation, according to the city’s database on lobbyists.

New York attorney Peter Gleason said the city website that documents lobbyists shows the legal contracts. “That is for everybody to look at and see who is lobbying which government official during which time frame,” he said.

Arzt denies wrongdoing, but does not deny that his contract to lobby Liu’s office overlapped his time as spokesperson for Liu’s campaign. In a brief interview, he asserted he had lobbied Liu’s office in November, saying, “According to our records, we lobbied the month before [December].”

He then said, “First, we didn’t lobby. Second of all, it didn’t matter if we did.”

And then concluded by saying, “We did not lobby the month we were there, nor would John’s office allow it.”

Arzt served as Liu’s spokesperson though July 2012, according to press reports.

According to Raymond Dowd of Dunnington law firm, who works on election law, it is prohibited for a lobbyist to lobby a political office while under personal obligation to that office, under section 3-219 of the New York City Administrative Code.

If Arzt was lobbying the comptroller’s office while serving as Liu’s campaign spokesperson, Dowd said the law should still apply, however, since it specifies the individual rather than the office.

“If you’re working for the campaign of a politician while you are lobbying that politician, that is the type of behavior that section 3-219 prohibits,” Dowd said. “And according to section 3-223, this is a class A misdemeanor.”

He added that if the case is of a lobbyist representing a political campaign without compensation, “It would make it even worse,” since it could make the office feel obligated to the individual. It is unclear whether Arzt was compensated for his role on Liu’s campaign.

A spokesperson for the New York City Conflicts of Interests Board press office declined to comment on whether Arzt had done anything illegal in his relations with the Liu campaign and the comptroller’s office.

Several individuals who have played key roles for John Liu have had brushes with the law or ties with communist front groups or criminal organizations.

Ellen Young, who initially served as district administrator for John Liu during his time on the New York City Council and then was elected in 2006 to the New York State Assembly, ran an immigration business with her husband, Johnny Cheng. He was charged with swindling Chinese immigrants and fled to China. Several immigrants interviewed by The Epoch Times blame Young, along with her husband, for the money they say they lost.

Liu’s former chief of staff, John Choe, is the founder of Nodutdol. According to a 2003 Korean-language newspaper report, Nodutol arranged trips to North Korea, glorified the regime, and was one of three New York organizations controlled by the North Korean regime. A 2006 audio recording of Choe has him speaking at an orthodox Marxist event about “struggling against the U.S. and U.S. imperialism.” Choe has denied Nodutol is a North Korean front group.

Pan is the executive vice chairman of the Fukien American Association (FAA), a Chinese front group tied to organized crime and the Chinese Communist Party. Aside from hosting visiting Chinese regime officials, the FAA is affiliated with the Fuk Ching gang, which is involved in human trafficking, extortion, and protection rackets. The gang is best known for the Golden Venture, a cargo ship that ran aground off the coast of Queens in June 1993 with 286 illegal immigrants stuffed below deck.

The FAA also raised more than $70,000 for Liu’s comptroller campaign, according to a July 2, 2008, report by the Chinese-language World Journal. In a recorded conversation with an undercover FBI agent played in court, Pan says that Liu approached him about getting the FAA to help fund his mayoral campaign.

Jenny Hou’s father, Jianli Hou, is the founder and president of the Beijing Association of New York, which works closely with the FAA and requires its members to attend various events sponsored by the Chinese Consulate. He was among the small group of Chinese from New York who brought John Liu on his 2007 trip to Beijing.

In Beijing, Liu was given the “The World is More Beautiful Because of You” award and met with Xu Yousheng, who was the vice director of the Overseas Chinese Affairs Council of the State Council, which takes orders from the Chinese Communist Party Central Committee. Xu worked as a connection between the Chinese consulates and the United Front Work Department, whose mission is to expand the Chinese regime’s influence overseas.