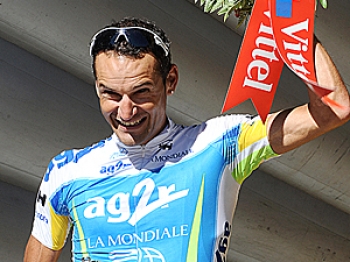 James Fish
alias for Chris J
View profile
Follow
biggersmaller
Print
AG2R rider Cyril Dessel labored up the climbs, flew down the descents, stayed near the front, and won the final sprint to take the win in Stage Sixteen of the 2008 Tour de France, while overall leader Frank Sckleck retained the yellow jersey and his CSC Saxo Bank team continued to display its dominance, in the penultimate mountain stage of the Tour.

“From the outset, the tactic was to put myself in the escape,” Dessel told reporters. “I was able to get there by joining the counter-attack after the initial move.

“I’m good on the downhill but I also knew that, with Popovych there, it would be very difficult to attack on the descent… so, in the last kilometers I waited for the right moment to go. I saw a turn at 400 meters to go which was perfect for speed. Then I saw Arroyo shaping up to go, so I gave it everything and it worked.”

Hardest Climbs of the Tour

Stage Sixteen was a steep twisting 157 km climb from Cuneo in Italy to Jausiers in France. The stage contained two Haut Categorie climbs, The first fifty km were uphill, then the road rose up at a 7% average grade for 25 km to the Col de la Lombarde, a climb that was sure to split the field.

After a steep, dangerous 20 km descent, where riders hit 100 kph (60 mph), the road headed back upwards towards the highest peak in the race, the 2800-meter Cime de la Bonette-Restefond—almost as steep as the climb to Col de la Lombarde, and longer, and late in the race—another devastating climb certain to drop many riders.

The end of the stage was another 20 km-in-20- minute descent, where riders would again be hitting speeds in excess of sixty mph.

The next stage, Embrun to L'Alpe-d'Huez, is one of the hardest mountain stages, with the HC climbs. After Stage Seventeen, the Tour heads for a long, difficult time trial, then the final stage on the streets of Paris. The very best time trialers could hope to make up time on the time trial stage, but the sprinters’ days are over, and the climbers had only this stage to make their marks.

It was announced that Oscar Perreiro, who crashed so badly in Stage Fifteen, was recovering form an operation on his broken elbow and was healing well, but would be out for the rest of the season.

Forty km from the start, a group of five riders—Samuel Dumoulin started the attack, and was quickly joined by Thomas Voeckler, Stefan Schumacher, Christophe Le Mevel, and Sebastian Rosseler.

A group of two dozen riders broke from the peloton in pursuit of the breakaway, but Frank Schleck, wearing yellow jersey, stayed back in the peloton, as did the other GC contenders.

A chase group formed, then broke up, as riders fell off and others attacked, coalescing and splitting as the rode rose more steeply or flattened a bit.

On the climb to the Col de la Lombarde, the attackers started dropping off one by one. Finally, only Stefan Schumacher, who won an early stage but had been quiet throughout the rest of the Tour, was left. He was first over the Col with a two-minute margin over the lead chase group, almost nine minutes ahead of the peloton.

Behind Schumacher were several small groups of chasers, and farther back, the peloton, led by CSC. With the Cime de la Bonette-Restefond ahead—the highest mountain pass in all of Europe—it was impossible to predict who would survive.

Francaise des Jeux sprinter Sébastien Chavanel dropped out on the climb up the Col de la Lombarde, and retired from the race—he was in last place in the General Classification, and his team no longer needed his efforts.

The Top of the Alps

The peloton picked up the pace at the base of the Col de la Bonnette, dropping many riders. It was at this point that the real race began, as the different teams with riders in the chase for the overall win began maneuvering for time.

CSC continued to push the pace, needing to gain time on the mountain stages because Cadel Evans is such a good time trialer.

Though the average grade of the climb is listed at under seven percent, there are short ramps of more then ten percent. On every one, more riders fell off.

With thirteen km left in the climb, the yellow jersey group of two dozen riders, which had swelled to over thirty briefly, was down to under a dozen, and those were spreading out with every steep ramp.

Ten minutes later, the group was down to eight: Andy and Frank Schleck and Carlos Sastre of CSC, Cadel Evans, Denis Menchov, Kim Kirchen, Bernhard Kohl, and Alejandro Valverde. In front of the yellow jersey group were two chase groups, each a minute ahead, and Schumacher, struggling but not slowing, a minute ahead of them. Kurt-Asle Arvesen of CSC joined this group to assist in pulling. [caption id=”attachment_70854″ align=”alignright” width=”320″ caption=”Frank Schleck doesn