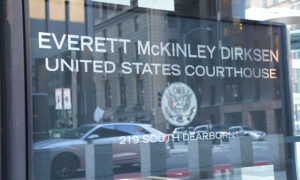 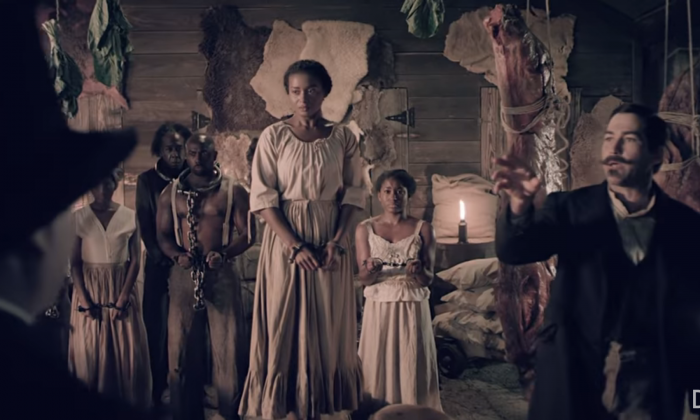 A still from "Death of a Nation," a film from Dinesh D'Souza showing the history of the Democratic Party and its "plantation" system of politics. (Courtesy of Dinesh D'Souza)
US Features

Dinesh D’Souza, a filmmaker and author of several New York Times bestsellers, has debunked powerful political myths still alive in our culture. In previous works, he has shown that the claim that the Republican Party is the party of racism is a lie. He has also shown that the notion that fascism and Nazism are ideologies of the “right,” rather than the “left,” is based on a false framing of history.

In his upcoming film and book, “Death of a Nation,” D’Souza delves into another piece of history, showing that the “plantation” system of the early Democratic Party lives on in systems of heavy taxation, government dependence, and identity politics.

“What the book does is it tells kind of a new story of how the plantation has defined the Democratic Party from the very beginning,” D’Souza said.

In his earlier movie, “Hillary’s America,” D’Souza showed the Democratic Party is the party of slavery, the Southern Confederacy, the Ku Klux Klan, and segregation. He noted this is “undisputed, historically,” but the left re-brands this history by claiming the Democrats shifted over time to become the party of civil rights and support for minorities. D’Souza said his new book and film “debunk” this narrative.

The key shift from the slave system of the South to today’s plantation system started with Martin Van Buren, the eighth president of the United States, from 1837 to 1841, and a leader of the New York Democratic Party. “Van Buren figured out that in the South there are slaves, but in the North there are poor penniless immigrants pouring into America: the Irish, the Italians, the Jews, and so on,” D’Souza said.

According to D’Souza, Van Buren realized that while he couldn’t directly use the slave system elsewhere, he could “create a system in which these immigrants can be completely dependent on the Democratic Party.” The Democratic Party would give them food, job references, and occasional help with finding apartments. In exchange, the immigrants would vote the Democrats into power to enable them to take money from the U.S. Treasury to finance the programs.

Through this system, D’Souza said, “the northern political machines which dominated the Democratic Party really for more than a century were themselves modeled on the slave plantation, except they didn’t use black slaves—they used newly arriving immigrants.”

Under this new plantation system, D’Souza said, the Democratic Party conspired to “rip off the taxpayer, or the working man,” in order to finance the programs the party used to buy its votes. Meanwhile, he said, “the immigrant got the short end of the stick, because the immigrants were helpless. They didn’t know what was going on. They just ran into this Tammany machine in New York, for example, and it controlled their lives.”

The Democrat social welfare programs financed by heavy taxation have largely targeted minority groups, he said, and have led to the often hopeless situations in today’s ghettos, barrios, and Native American reservations. He said, “All these places are very similar—they’re places where people are poor, where education is terrible, where nobody gets ahead, where families are in disarray, where there’s a lot of violence, and where there’s a lot of despair and nihilism, and where the vast, vast majority of people keep voting Democratic.”

The Lie of the ‘Fascist’ Right

D’Souza said the new film also includes elements from his recent book, “The Big Lie.” “The core theme of the movie is to refute the race card and the fascism card,” he said. “The race card is the Democrat idea that racism is now on the right, that it’s a phenomenon of the Republican Party and of Trump; and the fascism card is that fascism is on the right, and it’s now a phenomenon of Trump and the conservatives.

“The movie takes on these two incendiary accusations, and pins the racist and fascist tale not on the Republican elephant, but on the Democratic donkey.”

The notions that racism and fascism are elements of the Republican Party, rather than the Democratic Party, he said, have been shaped heavily by the left’s control of academia and the media for nearly two generations.

“They have done a lot to muddy these waters. They will say, for example, that because the Nazis were on one side of the war and the Soviet Union was on the other side, it follows that since the communists were left wing, the Nazis have to be right wing. But this is bogus,” he said.

“Communism and Nazism grew out of the same soil. They both were rooted in socialist economics, they both appealed not directly to the working class, but to a cadre of militants and revolutionaries, students, lawyers, journalists, ex-military guys. These were the core of Lenin’s revolutionary cadre, and they were also the core of both Mussolini’s and Hitler’s cadres.”

He noted that the main difference between communism and fascism is very minor: Communism pushed for international socialism, and fascism pushed for national socialism. “That’s not a big difference. That’s smaller than the difference between, say, the Shia and the Sunnis in the Muslim world, and yet the Shia and the Sunnis have had bloody battles that go back for centuries,” he said. “Sometimes groups that are quite similar ideologically have terrible wars based either on fine points of doctrine, or for competition for followers.”

Historically, even direct communist regimes such as the Soviet Union and the Chinese Communist Party have switched between the ideas of “international socialism” and “national socialism,” depending on their varying objectives.

D’Souza said another part of the film focuses on debunking misinformation about former President Richard Nixon’s Southern strategy, and on the violent clashes between Antifa and neo-Nazis in Charlottesville, Virginia, in August 2017.

“The Democrats will say, ‘Yes, Dinesh you’re right, the Democrats have this sort of history, but you’ve got to remember they changed. The party switched platforms, Nixon converted the southern racists into Republicans, and then look at Charlottesville—here you’ve got these neo-Nazis in Trump hats—so racism today is clearly on the right,'” D’Souza said. “And it is this claim that we destroy in the movie.”

To debunk this claim, D’Souza interviewed neo-Nazi organizer Richard Spencer, showing in the film that Spencer’s ideologies are on the “left,” not the “right.” He adds that “both in the new book and the movie, we show the leftist roots of white supremacy, which is a very eye-opening thing to watch.”

D’Souza also noted that another neo-Nazi organizer of the Charlottesville riots was Jason Kessler, who “has a history of leftist politics—he was an Obama supporter, and he was an Occupy Wall Street guy.” He noted that Kessler’s leftist history was well-known and was even stated on the Southern Poverty Law Center website. A Charlottesville newspaper did an exposé on Kessler that also detailed this background, noting that he even broke up with his girlfriend because she was too conservative, D’Souza said.

“All of this was out there, but the press didn’t touch it,” he said, “because they knew that to expose Kessler as a leftist was to undermine the whole beautiful story in which Charlottesville was proof that white supremacy is a Trump phenomenon.”

“Think about it this way: There’s no evidence that neo-Nazis or KKK members voted for Trump. No one has ever done an empirical survey that shows that,” D’Souza said. “So the only proof of something that is taken to be conventional wisdom is a few images drawn from Charlottesville of white nationalists wearing MAGA hats and cheering Trump. This anecdote, this handful of guys, is supposed to clinch the whole case. And that’s why counterexamples are devastating, because the whole case hinges on so few examples.”

When it comes to the actual white supremacists and neo-Nazis, D’Souza noted that many of them are atheist and many are admirers of black nationalism, even praising people like Malcolm X. “They support this notion of ethnic identity politics,” D’Souza said. “And interestingly, ethnic identity politics is not a phenomenon of the Republican Party, it’s a phenomenon of the Democratic Party. In fact, the Democratic Party is based on it.”

D’Souza has faced plenty of pushback over the years for his work, yet he is known for maintaining a calm demeanor when debunking arguments from critics and clarifying his findings on history.

He was given a full pardon on May 31, 2018, by President Donald Trump for exceeding limits on campaign finance donations to the campaign of Wendy Long for New York Senate in 2014 and making false statements to the Federal Election Commission.

D’Souza and others believe he was selectively prosecuted and that his sentence was politically motivated. The charges followed his 2013 film that was critical of former President Barack Obama, “2016: Obama’s America.”

When he received a full pardon from Trump, D’Souza said the feeling “was absolutely exhilarating.”

“I felt like I got my American dream back. I certainly got my rights back,” he said.

He noted that when he appeared on CNN for an interview following the pardon, he was told that it took powerful people including Sen. Ted Cruz (R-Texas) and Trump to get him pardoned, and he was questioned on whether that was a form of favoritism.

“And I said no,” D’Souza said, “because it [took] very powerful people like Obama, Eric Holder, and Preet Bharara to get me in the first place.

“So yes, it did take some powerful people to get me off because they had to undo what an earlier group of powerful people had done. That’s my take on the whole pardon business.”

D’Souza, who has been an author and speaker for most of his career, said his passion for making movies is based on the fact that they can reach a much larger audience.

The book version of “Death of a Nation” was released on July 31, and the film will be released nationwide on Aug. 3.