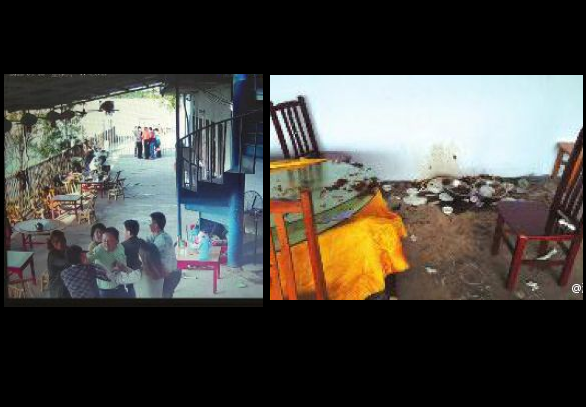 Scenes of the incident. (via China Business View)
China

When four Chinese civil servants in a restaurant got in a drunken argument with the boss over how to pay the bill, they smashed up his shop and began to beat him.

Li Jinming, the owner, was hit in the face and abdomen before collapsing in the April 16 assault. An ambulance rushed to the scene, but the 60-year-old was already dead.

It turns out that Li was a Communist Party secretary and deputy to the local People’s Congress in Nanzhao County, Henan Province.

The four assailants worked in the local agricultural and judicial bureaus, a land planning institute, and the county procuratorate, reported Caixin, a publication based in Beijing.

The disagreement arose when the four civil servants tried to pay the bill using an IOU, which the restaurant staff recognized as an attempt to use public funds or delay (and deny) the payment, as such behavior has been publicized before.

After smashing several sets of tableware, the customers began to argue with Li Jinming, who had come out to confront them. The argument became a brawl and, without knowing Li’s identity, the four officials set upon him, leading to his death.

Police who arrived at the scene had to physically restrain the men. Chinese Business View reported April 18 that one officer received a head injury and another had his uniform ripped open.

“You police are nothing, I work for the procuratorate,” one of the officials jeered.

The four have been removed from their posts and are in criminal detention.

Netizens commented on the officials’ blatant use of violence. “Drinking reveals their true colors,” one user said.

Another satirically speculated that the four would have their probably death sentences reduced, as has been the case with many Chinese officials and high-ranking Party members charged with capital crimes.

“It’s fine, the four will be removed of Party registration and sentenced as criminal. After a journey through the public security organs, procuratorial organs and people’s courts, the death penalty will become a stay of execution, which will then become life imprisonment, which will in turn end up as a fixed-term sentence. He will still be a good dog after ten years. You have to be flexible, you know?”

“And if the dead was not a deputy to the People’s Congress?” said another comment, pointing at the Chinese police’ propensity to ignore crimes committed by officials against the common folk. “It’s horrible to think about.”

Another user is more ominous, using poetic wording to allude to the decline of the entire regime: “They are grasshoppers on the same string in late autumn, why do they torment each other so hastily?”