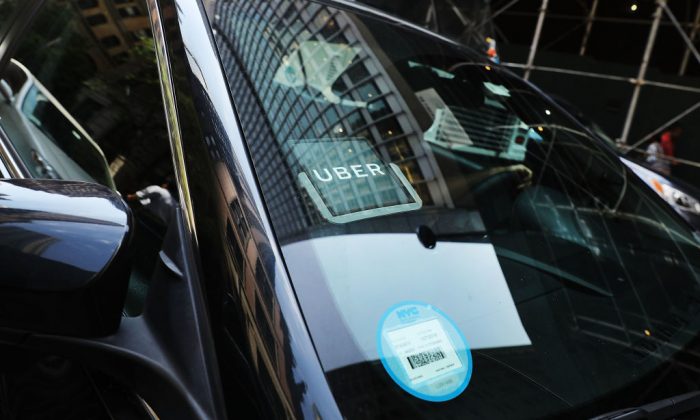 An Uber car in a 2017 file photo. (Spencer Platt/Getty Images)
US News

A drunk man blacked out and ordered an Uber ride from a party he was at in West Virginia.

Kenny Bachman was staying near the West Virginia University campus in Morgantown and was partying just a short distance away.

However, the New Jersey native apparently forgot where he was and ordered an Uber to Gloucester County in Jersey.

The Uber driver took him more than 300 miles.

When Bachman came to, he was shocked.

“I just woke up. And I’m thinking, ‘Why the [expletive] am I in the car next to some random ass dude I don’t even know?” he told the NJ Advance Media.

When the ride ended, he got the biggest shock of all.

“I saw how much it was when I was like ‘Alright, this is insane, that’s just crazy,'” he said.

But the total price was boosted to $1,635.93 because of surge pricing.

According to Uber, surge pricing is when there’s a lot of demand for rides.

“There are times when so many people are requesting rides that there aren’t enough cars on the road to help take them all,” Uber’s website states. “Bad weather, rush hour, and special events, for instance, may cause unusually large numbers of people to want to ride Uber all at the same time.”

“In these cases of very high demand, fares may increase to help ensure those who need a ride can get one. This system is called surge pricing, and it lets us continue to be a reliable choice.”

Bachman said he couldn’t get out because they were already long on the way to New Jersey, but he challenged the charge, claiming he never put his home address for the Uber.

“Obviously I sent the Uber, I don’t know where to, I know I wouldn’t send it to my house, I knew where I was,” Bachman said. “He was on my phone, without me allowing it.”

Uber said it resolved the claim with Bachman. He ultimately paid the fare.