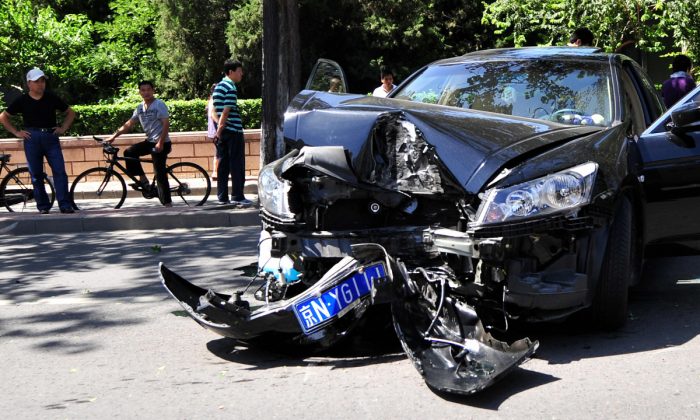 A young woman plowed her family’s car into a vehicle stopped at a red light, killing two and injuring three others along with herself, according to mainland Chinese news outlets.

The crash occurred on July 3 in Yongcheng City, Henan Province, China. The driver, surnamed Tan, 23, along with her two passengers, were detained. All three suffered various injuries. Two of the passengers in the back seat of the other car were killed, and one was injured, according to U.S. China Press.

After significant coverage in China, citizens posted on social media that there may be a government and police cover-up due to her rich background.

Video footage includes the vehicle scraping against other cars as it leaves a parking lot, the fire after the crash (1:37), and footage of the crash (2:00).

A Crash and Cover-up?

The crash happened at 10:42 p.m. on July 3. Tan and two others had gone to a barbecue restaurant, where they were drinking, according to China Xiaokang Net.

Video footage shows the three driving in a family member’s Maserati, an Italian luxury car. Due to tight parking, Tan scrapes her car against two others for over a minute, before speeding off.

Tan then slams the car into the back of a BMW parked at a red light. The impact throws both cars across the intersection. The BMW later caught on fire. The two killed in the crash were both government employees, according to China Xiaokang Net.

Tan and her two friends were reportedly arrested. However, reporters and social media users found inconsistencies.

After the incident, social media users and reporters looked into the driver’s identity. After finding Tan’s social media accounts, users were enraged by the combination of the young woman’s social status and wealth.

Pictures of Tan’s showy lifestyle were shared on Weibo, China’s version of Twitter. Much of her social media account was dedicated to flaunting her wealth. Further, Tan attended vocational college, and was unemployed, according to U.S. China Press.

After the incident, all posts on her account were deleted on July 4 at about 9 p.m.

Users took pictures of much of the content of her account before it was deleted. On July 2, one day before the crash, she had posted to her Weibo account: “All things have cause and effect. Whatever cause you choose, you have to take on the effect.”

Internet users noted that, since the police claimed to have detained Tan on July 3, then her Weibo account should not have been cleared out on July 4. The username was also changed to TMMemily. TMM likely stands for Tan Moumou; the title “Moumou” in Chinese is similar to saying John or Jane Doe, and is used by police for all suspects.

Further, police refused to speak to Chinese reporters when contacted.

By July 5, the backgrounds of the suspects, along with Tan, leaked out to the public, according to China Xiaokang Net. All three come from wealthy families.

Tan is the daughter of a leather and fur clothing factory owner. China Xiaokang Net reported that Tan’s family owned the largest factory in their village.

The three are reported to still be in custody.

Many social media users voiced their anger toward Tan as well as the Chinese regime after the incident.

User “High Clouds, Early Forest” wrote that there were more people injured, but officials suppressed the reports, and mocked the Chinese regime’s abuse of power. “Officials really are brave, they dare to suppress so many lives. If this [explicit] isn’t sentenced to death, then that’s very Communist, that’s Socialist, that’s a harmonious society.”

Another user named “Number 3 Electric Pole” wrote: “[She] won’t get [punished], her family is rich, the traffic police will only denounce her, knock three points off her license, and fine her 200 yuan ($30). However, the BMW in front of her ruined her car, so the BMW will have to compensate her.”