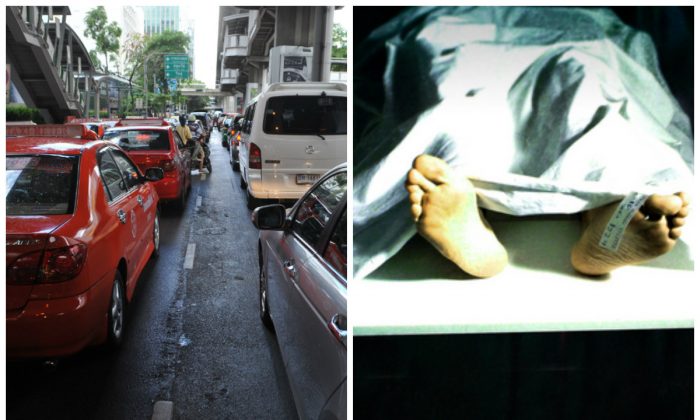 Drunk driving in Thailand may lead people to a morgue—as a new legal punishment aimed at making offenders get a close and gory look at what irresponsibility looks like.

In an effort to decrease the number of road incidents during the annual weeklong New Year’s celebration in Thailand, authorities may be sending drunk drivers and repeat offenders for duty at hospital morgues. Officials earlier this year said drunk drivers could have their cars impounded for the duration of the holiday and recently approved the morgue shock treatment plan.

Thousands of people go on the roads returning to their villages from big cities after the Songkran Holiday (which begins on April 13 this year). Many of them hit the road with alcohol in their system and motorbikers often have little respect for helmet laws. The government calls the holiday time frame “The Seven Days of Danger,” in which an average of 2.3 people die and 160 are injured every hour.

“Traffic offenders who are found guilty by courts will be sent to do public service work at morgues in hospitals,” said Police Col. Kriangdej Jantarawong, deputy director of the special task planning division.

“It is a strategy used to make traffic offenders afraid of driving recklessly and driving while they are drunk because they could end up in the same condition. It is aimed to be a deterrent, a way to discourage people,” added the official.

Thailand has the second worst record in the world for traffic deaths, and health and safety experts fear the it may be getting worse.

The director of the emergency response for the Bureau of Public Health, Anurak Amornpetchsathaporn, said on April 11 that having offenders work at morgues may get drivers to reflect in a deeper way, rather than doing other community service like cleaning parks and libraries, which have failed to discipline.

“They should see the actual physical and mental damage,” said Amornpetchsathaporn. “In the morgue, they will have to be cleaning up and transporting bodies, so that hopefully they would feel the pain, so that they may understand and attain a good conscience, so that it could be safer on the roads.”