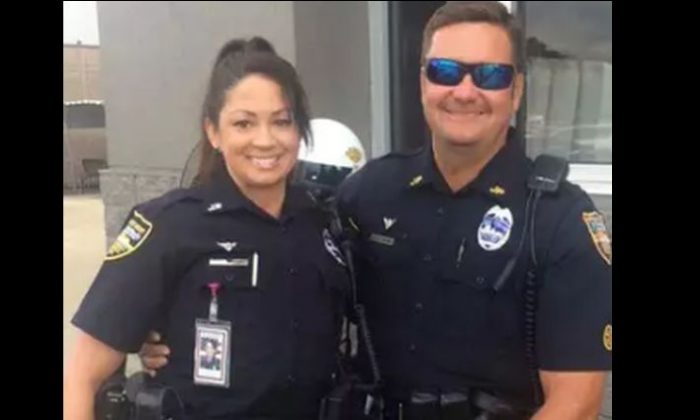 The crash took place at around 1:15 a.m. on Interstate 95 and SR-16 while the family was driving home from a sporting event, WLTV reported.

A second vehicle crashed into the family’s car as they were driving down the road. Both were left critically wounded in the accident, and WLTV said that Cathy Adams had been mortally wounded and is being kept on life support until her organs can be donated.

William Adams suffered a broken neck in the collision and he’s in the intensive care unit in critical condition.

Kim Johnston, the allegedly drunk driver, was charged with driving under the influence with serious bodily injury to another person. More charges are likely in the case.

The Jacksonville Sheriff’s Office sent out a message on Twitter: “Two of our employees, a police officer and sworn bailiff were involved in a serious traffic crash in another county early this morning. @FHPJacksonville handled the investigation. Our prayers are with our JSO family.” They also asked for prayers for the family.

News crews in the area who sent reporters to the Adams’ home were asked to leave the family alone by the sheriff’s office.

“We are aware of media sitting in front of their home. They are requesting you to leave and leave them alone at this time,” the office wrote on Twitter.

“There are a number of states that have raised speed limits, some now have stretches at 80 or 85 miles per hour,” she said in the CNBC report. In Texas, for example, she estimated that traffic fatalities jumped 7 percent from 2015 to 2017, in part due to higher speed limits in the state. “We know it’s happening even though distracted driving data is hard to come by,” she said of drivers using smartphones while behind the wheel. “Police reports on accidents often don’t report if the driver was distracted and in many accidents, people don’t self-report themselves.”