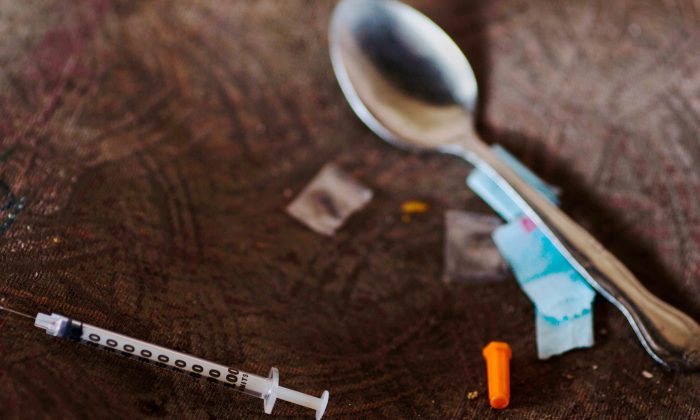 A needle, spoon, and narcotics bag are seen near a heroin encampment in the Kensington neighborhood of Philadelphia, Pennsylvania, on April 10, 2017. (Dominick Reuter/AFP/Getty Images)
US News

A Pennsylvania woman has died after unwittingly absorbing the drugs her son overdosed on the day before, according to reports.

Theresa Plummer, 69, found her 45-year-old son, Ronald, passed out in the bathroom of their home in Portage, Pennsylvania, on Nov. 5. She stayed with him in intensive care while doctors treated him.

The next day Plummer tried to clean up the drugs and paraphernalia he had dropped when he passed out.

Somehow some of her son’s drugs got into her system, according to the coroner. Cambria County Coroner Jeff Lees told WJAC News she may have made contact with the drugs through handling her son’s paraphernalia, possibly by absorbing them through her skin.

Plummer was taken to Conemaugh Memorial Medical Center in Johnstown after complaining of shortness of breath. She died there later that day.

“Hospital staff informed me that she seemed to be in good health when she was there with her son,” Lees told WJAC News.

“This is a caution for safety for anyone coming into contact with any type of powder substance,” Lees added. “You should use extreme caution and notify the proper authorities.

“My strong advice to any family that may have this happen to them is to call law enforcement to have them or EMS services come back and remove the substance or material that may have been left behind.”

The next day, Ronald also died at Conemaugh Memorial Medical Center from his suspected overdose.

Coroner Jeff Lees said toxicology reports won’t be back for six to eight weeks so he cannot yet pinpoint the exact cause of death or identify the substance, or substances, that killed them.

The prime suspect for the lethal substance would be fentanyl, the Miami Herald suggests. Fentanyl is a synthetic opioid which the U.S. Drug Enforcement Agency warns can be up to 50 times more powerful than heroin. Carfentanyl, another derivative, can be 5,000 times as potent as heroin and been targeted by authorities around the world as a potential chemical weapon. China, with its lax regulation, has been exporting the deadly chemicals for years.

The DEA issued a warning to all first responders to take extreme care around any substance suspected to be fentanyl or a related substance. The DEA recommends first responders wear gloves, dust masks, paper suits, and shoe covers because the drug can be so deadly at such small doses.

“Since fentanyl can be ingested orally, inhaled through the nose or mouth, or absorbed through the skin or eyes, any substance suspected to contain fentanyl should be treated with extreme caution as exposure to a small amount can lead to significant health‐related complications, respiratory depression, or death,” the DEA warning states.

The DEA says 2 to 3 milligrams of fentanyl is enough to cause respiratory depression, arrest, and possible death—a measurement equivalent to five to seven grains of table salt.

The Center for Disease Control reported 33,091 deaths due to opioid overdose in 2015. Of those, 9,580 were caused by synthetic opioids other than methadone, which includes fentanyl and fentanyl‐related substances—an increase of 72.2 percent over previous years.