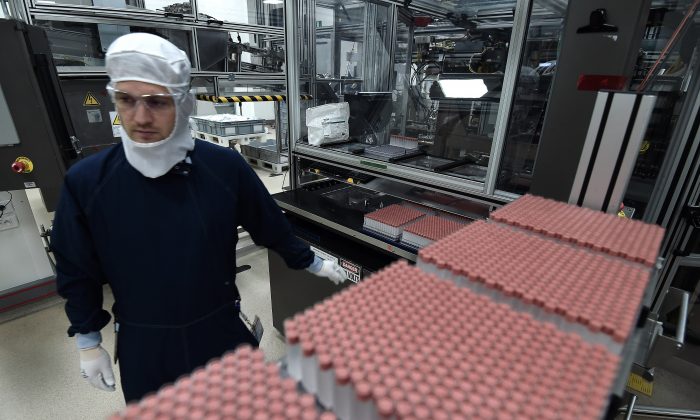 INDIANAPOLIS—Eli Lilly has dropped a lower-than-expected 2016 forecast on Wall Street after wrapping up a year in which its stock soared above the broader market.

The drugmaker said Tuesday that it expects adjusted earnings in the new year to range between $3.45 and $3.55 per share, excluding charges like deal integration costs. It predicts revenue of between $20.2 billion and $20.7 billion.

Analysts forecast, on average, earnings of $3.65 per share on $21.36 billion in revenue, according to FactSet.

Lilly’s outlook comes after the maker of the insulin Humalog topped analyst expectations for the first three quarters of 2015 and bumped up its annual forecast for that year in October. Lilly reaffirmed on Tuesday that forecast for adjusted 2015 earnings of between $3.40 and $3.45 per share.

Bernstein analyst Dr. Tim Anderson said in a research note that Lilly’s forecast for 2016 actually calls for “quite healthy” earnings and revenue growth compared to its peers, when the impact of foreign exchange rates is excluded.

Lilly, also known for the erectile dysfunction drug Cialis and its portfolio of cancer treatments, has been recovering from the loss of patents protecting key products like the antidepressant Cymbalta from cheaper generic drugs. The company has invested heavily in developing new drugs, and that portfolio includes potential cancer treatments and an Alzheimer’s disease drug in late-stage testing. Lilly now has nine potential treatments or diagnostic agents that are either in late-stage clinical testing or have been submitted for approval.

“The pipeline looks good, and the (company’s) revenue is likely to hit expectations over a longer term,” said Erik Gordon, a professor at the University of Michigan’s Ross School of Business who follows the pharmaceutical industry.

He added that analyst projections for Lilly’s 2016 earnings and revenue may have been a little aggressive.

Shares of Lilly climbed 2.6 percent, or $2.13, to $85 Tuesday morning after it released its forecast. Broader indexes rose slightly.

Indianapolis-based Eli Lilly and Co.’s stock soared 22 percent in 2015 and reached its highest prices in about 15 years before closing the year at $84.26. Meanwhile, the Standard & Poor’s 500 index fell less than 1 percent.

The company plans to detail its fourth-quarter and full-year performance Jan. 28.