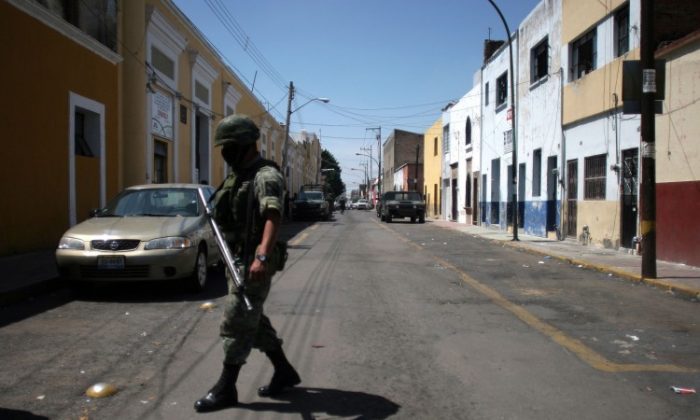 A Mexican soldier stands guard in front of the Forensic Institute in Guadalajara, Mexico. (Hector Guerrero/AFP/Getty Images)
US

Drug Violence in Mexico May Have Shifted, but Not Abated: Report

Even though Mexico’s governments have dealt serious blows to drug cartels, they don’t appear to be slowing down any time soon.

A new report from Stratfor, a global intelligence analyst group, said despite 2010 being a record year for violence in Mexico, 2011 was likely worse, with the Los Zetas eclipsing the more entrenched Sinaloa Federation as the most powerful cartel in the nation.

According to government data from January to September 2011, the violence in Mexico appears to be about the same as the previous year’s figures, if not worse. However, once figures for the last quarter of the year are released and incorporated, Stratfor expects “the death toll for 2011 may have exceeded what had been an unprecedented number” in 2010.

“Despite media reports to the contrary, we can conclude that violence in Mexico did not decline substantially in 2011,” wrote Stratfor. What appears to have happened is that murders and other forms of violence by drug cartels have “shifted geographically, abating in some cities and worsening in others.”

Ciudad Juarez, the notorious city located right next to El Paso, Texas, known for being the most murder-prone city in North America, experienced a decline in violence. There were 1,955 recorded murders last year, compared with 2010’s record 3,111 murders.

That decrease, Stratfor wrote, was probably offset by accompanying increases in Veracruz, Monterrey, Durango, Nuevo Leon, Acapulco, and other cities.

Stratford’s report comes just a few weeks after the Mexican attorney general’s office released figures, which said 12,900 were killed in the first nine months of 2011, but said only 1,206 were killed in Juarez, while another 800 were killed in Acapulco. At least 47,500 lives have been claimed since 2006, when President Felipe Calderon directed the country’s army against the cartels.

“The battle lines in Mexico have not been drawn absolutely, and not every entity calling itself a cartel swears allegiance to one side or the other, but a polarization clearly is occurring,” Stratfor wrote.

While both cartels are notoriously violent, the Zetas, formed a decade ago by ex-military officers, appear to use brute force in the form of intimidation, torture, and murder more than the Sinaloas, who are more apt to extract bribes.

“Sinaloa certainly can and does resort to ruthless violence, but the violence it employs is merely one of many tools at its disposal, not its preferred tactic,” the report said.

Stratfor, citing government data, said the Zetas appear to operate in 17 states, whereas the family-oriented Sinaloas are present in 16 states. The Zetas are the dominant force in the southern Yucatan Peninsula and have recently moved into Zacatecas and Durango states.

In 2011, the Sinaloa cartel suffered heavy losses, as at least 10 bosses were arrested or killed. The Zetas also lost a number of bosses but still remain a force to be reckoned with, the report says.

All the while, the Mexican government appears to staying the course in dealing with cartels, using the military as its arm, the report said. The government will, in the next year, have a very difficult time in brokering a truce between the Zetas and the Sinaloas due to the anger and misgivings between the two entities.