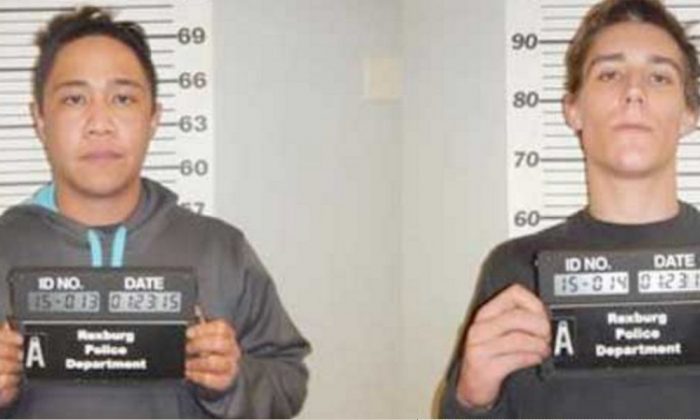 Drug Traffickers in Idaho Call Police on Themselves

Two men traveling from Nevada to Montana carrying more than 20 pounds of marijuana called police while under the influence.

A police call, released by Idaho’s Rexburg Police Department, details an incident that took place last year when two men—Leland Ayala-Doliente, 22, and Holland Sward, 23—came into Idaho and felt like they were being followed by undercover police officers, according to EastIdahoNews.

Rexburg Police Cpt. Randy Lewis told the news website that they weren’t being followed by cops. However, once the two exited US Highway 20, they parked their vehicle and called 911, saying they wanted police to stop following them.

Here’s a part of the phone call, as transcribed by EastIdahoNews:

Ayala-Dolitente: Hi, uh, we’re the two dumb [expletive] that got caught trying to bring some stuff through your border and all your cops are just driving around us like a bunch of jack wagons and I’d just like for you guys to end it. If you could help me out with that, we would like to just get on with it.

Dispatcher: You got caught doing what?

Ayala-Dolitente: Ahh… okay. Um… We kind of got spooked here trying to bring some stuff across your Idaho border.

Ayala-Dolitente: And, yeah. A bunch of your cops driving around in a bunch of civilian cars not wanting to pick us up. I don’t know what’s the deal. I was just wondering if you could help us out and just end it.

Ayala-Dolitente:Yeah… if you could call one of them. I don’t know. It’s getting cold out here man. I just want to get warm and just get on with this whole thing so…

Dispatcher: Ok. Where you at right now?

Ayala-Dolitente: University Boulevard right next to the gas station and Applebee’s. All your buddies are around us so if you could help us out that’d be great.

Dispatcher: Ok… alright. Is it just you or is there anybody else with you?

Ayala-Dolitente: It’s me and my buddy that I brought with me and then we have a dog that we were gonna bring back to it’s owner but…

Police officers arrived on the scene shortly after, and they said that both men had their hands behind their heads.

“We got caught and we’re surrendering,” Sward said.

Cops found 20 pounds of marijuana inside of a dog cage. There was also $567 in cash in the car.

Two drug traffickers get high and call the Rexburg police to turn themselves in. Here’s the 911 call that will…well,…

Ayala-Dolitente and Sward were both charged with one felony count of trafficking marijuana.

According to the National Organization to Reform Marijuana Laws (NORML), Idaho has some of the strongest marijuana laws in the United States.