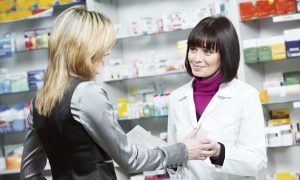 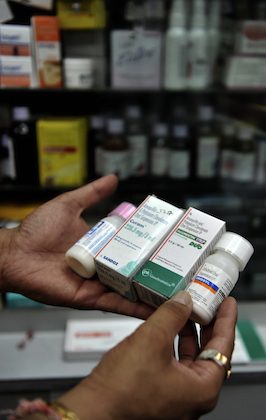 A pharmacist displays antibiotics, on Oct. 20, 2010 in Mumbai, India. The overuse of antibiotics has resulted in the proliferation of antibiotic-resistant diseases. (SAJJAD HUSSAIN/AFP/Getty Images)
Opinion

We were told not to do it but we did it anyway. For decades the medical and biological sciences have been warning us about the dangers of using antibiotics indiscriminately: of attempting to treat viral infections that are not amenable to this therapy; of interrupting the full course of a drug regimen before both the strong, as well as the weak, bacteria are killed; and of using antibiotics routinely in industrial agriculture as a growth promoter and to prevent the outbreak of diseases in crowded growing conditions.

Now antibiotic resistant diseases are proliferating. Infections that were once routinely treatable are becoming untreatable. The most common is MRSA, an acronym for “methicillin-resistant Staphylococcus aureus. After this ordinary infection became resistant to penicillin, staph infections were treated with the more powerful methicillin. Now they are becoming resistant to even vancomycin, the last effective antibiotic in the available arsenal of drugs.

Infections that were once routinely treatable are becoming untreatable.

In all likelihood, evolutionary processes would eventually have made Staphylococcus aureus resistant to the traditional repertoire of medical therapies. But the present resistance has been hastened exponentially by the profligate use of drugs in the livestock industry. And so, the MRSA version spread easily to humans, an event that has all the makings of a health catastrophe. If a simple Staphylococcus aureus infection becomes untreatable, then routine operations could become life-or-death gambles. A tonsillectomy, an appendectomy or a hip replacement could be extremely risky medical procedures. The safe practice of modern medicine could be seriously jeopardized by the drug-resistance of this ordinary bacterium.

Carbapenem-resistant Enterobacteriaceae or CRE is a less known infection. First discovered in India in 2009 and now found in locations around the world, its presence means that common urinary tract infections may not be treatable. Some strains of gonorrhoea have also become untreatable. Serious as these diseases are, they pale beside Multi-drug resistant tuberculosis (MDR-TB).

Tuberculosis was once nearly eliminated as a human disease, with just an few annual outbreaks in a few locations. But resistance began to develop quickly when unsupervised patients did not complete the prescribed drug protocol, allowing the more resistant strains to survive. And so they did. Now proliferated, about half of all TB cases are unresponsive to the available suite of antibiotics. The “new and improved” tuberculosis is on its way to once again become a serious, communicable international disease.

Drug resistance has impacts beyond human health. As bacteria become immune to the drugs that are routinely added to the feed in industrial agriculture, uncontrollable epidemics in livestock will become more common and food supplies less reliable. Chicken, beef and pork – any industrially farmed meat – will become more expensive. The continued industrial use of antibiotics – 70 per cent to 80 per cent of all antibiotics used – will maintain the vector through which even more drug-resistant bacteria can be transferred to people.

The traditional solution to this problem has been to design new antibiotics. So, where are they? Kevin Outterson, an expert in health law at Boston University, explains that antibiotics are not highly profitable drugs. Many of the older drugs are off-patent, still effective, and cheap, so the new ones would also have to be cheap to compete. Therefore, no profit, no research and no new antibiotics. In 1990, 18 big drug companies were researching new drugs; by 2011, only five were still actively searching. Drug companies, it seems, are waiting for the wholesale death from antibiotic resistance to reach the epidemic proportions sufficient to be financially inspirational.

This reveals a fundamental flaw in the entire strategy of making drugs. If the primary motive is profit rather than health, then drug resistance is posing a dilemma that will only be solved by massive tragedy and suffering. So far, the only viable option is for governments to fund the research and development of new antibiotics, to regulate sales, but to guarantee the drug companies a profit. But the U.S. is opposed because of its “interference in free market” processes.

Freedom has been the source of the whole drug-resistant problem. Antibiotics have been prescribed too freely by doctors, demanded too often by patients, and used too liberally by industrial agriculture. Very effective drugs are being rendered ineffective by an undisciplined market that believes in neither restraint nor proportion. Because we possess useful drugs doesn’t mean their use should be indiscriminate.

Ray Grigg is the author of seven internationally published books on Oriental philosophy, specifically Zen and Taoism. This article was previously published on Troy Media (troymedia.com).