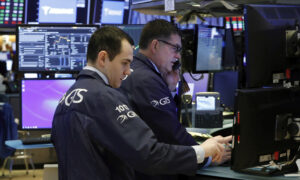 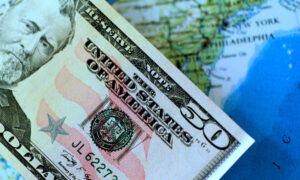 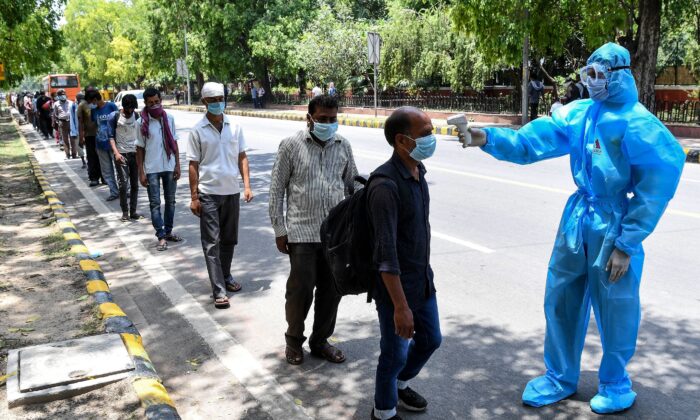 A volunteer wearing a protective suit checks the body temperature of homeless people standing in queue to get free lunch packets on the roadside after the goverment eased a nationwide lockdown as a preventive measure against the COVID-19 coronavirus, in New Delhi on May 30, 2020. (Prakash Singh/AFP via Getty Images)
World

JOHANNESBURG—Researchers on June 16 announced the first drug shown to save lives among severely ill coronavirus patients, offering hope even as infection rates rose in Africa and Asia, and amid worrisome upticks of contagion in countries that had largely contained the virus.

The cheap, widely available steroid, called dexamethasone, reduced deaths by 35 percent in patients who needed treatment with breathing machines and by 20 percent in those only needing supplemental oxygen, the researches said in England.

“This is an extremely welcome result,” one study leader, Peter Horby of the University of Oxford, said in a statement. “The survival benefit is clear and large in those patients who are sick enough to require oxygen treatment, so dexamethasone should now become the standard of care in these patients. Dexamethasone is inexpensive, on the shelf, and can be used immediately to save lives worldwide.”

The study is a large, strict test that randomly assigned 2,104 patients to get the drug and compared them with 4,321 patients getting only usual care. The researchers said they would publish the results soon.

New, record-high infections were registered in South Africa over the weekend despite the further loosening of restrictions that opened businesses and houses of worship. The country now has more than a quarter of the cases on the 54-nation African continent, with more than 73,000.

“It is imperative that we do not fall into despair as we combat COVID-19,” South African Health Minister Zweli Mkhize told a briefing. “We can never be complacent, never found wanting.”

Those challenges were magnified elsewhere across sub-Saharan Africa with experts warning that the pandemic’s full impact there hasn’t been reached.

Fragile health systems, a “catastrophic” shortage of health care professionals and a dramatic drop in medical imports mean that “the health and economic devastation anticipated is yet to unfold,” officials with the Africa Centers for Disease Control and Prevention wrote last week in a commentary for the journal Nature Medicine.

Daily coronavirus deaths continued to rise in Egypt, with the health ministry reporting 97 deaths on June 15, the country’s highest for a single day. While Egypt has more than 46,000 COVID-19 infections and 1,672 deaths, the government has resisted a full lockdown to try to keep the economy functioning. Authorities have shortened the nightly curfew and plan to reopen airports next month.

Israel’s steady rise in infections since restrictions were eased in May has increased fears of what a top Health Ministry official said looked like the “beginning of a wave.”

The country is reporting 200 new cases daily, a tenfold increase from a few weeks ago, and Israeli leaders warned of possibly reinstating strict lockdown measures if people don’t heed calls for people to wear masks, maintain social distancing and wash their hands.

Pakistan’s steady rise in coronavirus cases has put the country in the top 15 nations globally for infections, with more than 48,000. Several hospitals have begun refusing patients because they no longer had available beds.

Pakistan’s daily number of infections is nearly 6,000, and one official, Asad Umar, warned that they could top 1.2 million by the end of July.

After fighting the coronavirus for months, Iran saw its highest single-day spike in reported cases since the Muslim fasting month of Ramadan ended in late May, renewing fears about a potential second wave of infections.

Iraq reported 58 deaths on June 15, the most in a 24-hour period since February. According to Health Ministry figures, at least 652 people have died from 21,415 confirmed cases, and the increase in deaths has raised the worry that Iraq’s frail health system is not equipped to handle the surge of patients.

Russia’s daily caseload of infections continued to grow, despite a decrease in the city of Moscow, which accounted for about 40 percent of the country’s 545,000 confirmed cases. Discounting Moscow’s figures, the daily number of new coronavirus cases in Russia has grown to around 7,000 from 6,000 three weeks ago.

Turkey, which has seen an uptick in cases since it eased restrictions in early June, made the wearing of face masks mandatory in five more provinces on June 16.

“We cannot struggle against the virus without masks,” Health Minister Fahrettin Koca tweeted.

Chinese authorities locked down the third neighborhood in Beijing to contain a new coronavirus outbreak that has infected more than 100 people after the country appeared to have largely contained the virus since it first appeared there late in 2019.

Most of the cases have been linked to Beijing’s Xinfadi wholesale food market, and people lined up for massive testing of anyone who had visited the market in the past two weeks or comes in contact with them. About 9,000 workers at the market were tested already.

New Zealand, which hadn’t seen a new case in three weeks, said it is investigating a case in which two women who flew in from London to see a dying parent were allowed to leave quarantine and drive halfway across the country before they were tested and found to be positive.

The reemergence of the virus in the country that earned widespread praise for how it handled infections raised the specter that international air travel could trigger a fresh COVID-19 wave just as countries are reopening airports to stimulate tourism.

South Korea reported 34 new cases on June 16. Half were in densely populated Seoul, where officials are scrambling to stem transmissions linked to leisure and religious activities and low-income workers who can’t afford to stay home.

The Philippines reimposed a strict lockdown on the city of Cebu after a rise in cases. Quarantine restrictions were reimposed on Manila for another two weeks as infections continued to spike.