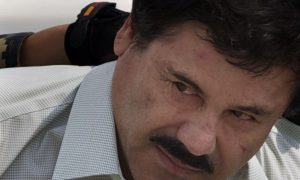 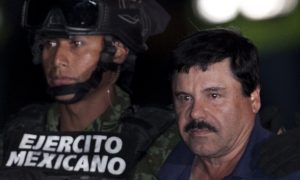 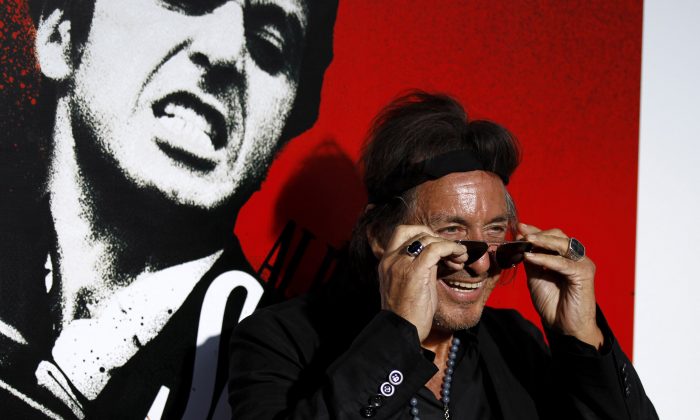 Actor Al Pacino arrives at the "Scarface" Legacy Celebration Event in Los Angeles on Aug. 23, 2011. In the 1983 movie, he plays a Cuban immigrant who enters a life of crime and eventually, takes over a drug cartel and inevitably, spirals out of control. (AP Photo/Matt Sayles)
Entertainment

Drug Lords Real and Fictional Are Plentiful in Pop Culture

He thought his story was movie material. After all drug lord Joaquin “El Chapo” Guzman, the leader of Sinaloa cartel, had been captured twice and escaped, and that, along with his ruthlessness, made him a name known in pop culture. But it was those Hollywood dreams that helped Mexican marines track him down in Los Mochis, a seaside city, and capture him Friday.

Guzman might yet become a Hollywood subject. The Hollywood Reporter reported last summer that director/producer Ridley Scott and Fox were teaming up to adapt the fictional book, “The Cartel,” into a movie.

Actor Sean Penn Interviews Chapo Guzman While on the Lam

A look at some notable drug lords in popular culture:

A TV series about fictional meth cook and would-be kingpin Walter White, portrayed by Bryan Cranston, which ran from 2008 to 2013. White was a high school chemistry teacher, but when diagnosed with cancer, he turned to producing methamphetamine with a former student. The series was set in Albuquerque, New Mexico.

Denzel Washington starred in this 2007 movie as Frank Lucas, who takes over after his boss dies and becomes a key heroin drug lord in Harlem.

Russell “Stringer” Bell and Avon Barksdale, portrayed by Idris Elba and Wood Harris, respectively, play kingpins in this show about different facets of crime and life in Baltimore, including the inner workings of drug-selling street gangs. The series aired from 2002 to 2008

In the 1991 film, Nino Brown, portrayed by Wesley Snipes, becomes a powerful crime lord with a growing drug business. Even friends and associates aren’t safe from his wrath. In the end, Brown is killed after leaving a courtroom. The movie also starred Ice-T.

Al Pacino plays Tony Montana in this 1983 move that’s become legendary even among those who haven’t seen it. He’s a Cuban immigrant who enters a life of crime and eventually, takes over a drug cartel and inevitably, spirals out of control. A memorable line: “Say hello to my little friend.”