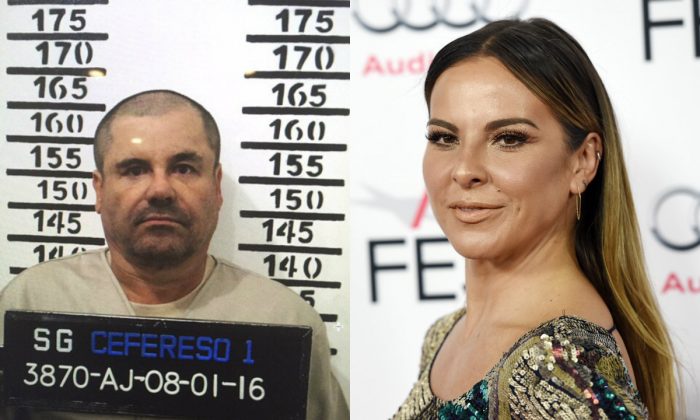 On the left, in this Jan. 8, 2016 image released by Mexico's federal government, Mexico's most wanted drug lord, Joaquin "El Chapo" Guzman, stands for his prison mug shot with the inmate number 3870 at the Altiplano maximum security federal prison in Almoloya, Mexico. On the right, actress Kate Del Castillo during the 2015 AFI Fest at the TCL Chinese Theatre on Monday, Nov. 9, 2015, in Los Angeles. (Chris Pizzello/Invision/AP)
Americas

MEXICO CITY—Transcripts of over a month of text messages between drug lord Joaquin “El Chapo” Guzman and Mexican actress Kate del Castillo showed the capo was less interested in making a movie about his life than he was in flirting with the actress.

The transcripts published Wednesday by the newspaper Milenio — and confirmed as authentic by a federal official — showed that Guzman’s main concern was getting face-to-face get-togethers with Del Castillo, and that he didn’t even really know who Sean Penn was.

Penn has acknowledged he tagged along for the Oct. 2 meeting at a mountain hideout originally set up by Del Castillo to discuss plans for a movie about Guzman’s life.

“What’s that actor’s name?” the account identified as Guzman’s writes in one message. He later asks his lawyers to tell him what movies Penn has appeared in. Even when Guzman dedicated a video statement as an “exclusive for” Del Castillo and Penn, the drug lord stumbles over Penn’s first name, pronouncing it “SAY-ahn.”

The federal official, who spoke on condition of anonymity because he or she was not authorized to be quoted by name, said the dozens of texts were authentic. Many expressed admiration, and longing for the next meeting, more than concern about the purported movie project.

“I’ll tell you, I am more excited about you than the (movie) script,” Guzman wrote to Del Castillo, to whom he had identified in his chat or text account as “ermoza,” a misspelling of the Spanish word for “beautiful.” ”I’ll take care of you,” he adds.

Another text from the drug lord reads: “How is the best and most intelligent woman in the world, who I admire a lot?” At one point, Guzman — who is reportedly married to former beauty queen Emma Coronel, and has had children with her and several other women — writes “My mother wants to meet you. I told her about you.”

“I want you with all my heart,” he wrote.

Del Castillo responds in kind. “Apart from our (movie) project, I am very excited about seeing you eye to eye, in person,” she wrote, adding later “we will embrace each other soon!”

Milenio said it obtained the transcripts of the texts from a federal official, who also could not be named. Del Castillo’s representatives did not respond to email requests to comment on the texts.

In the messages, even Guzman recognizes that Mexican or U.S. intelligence officials were probably following or monitoring many of the people who knew him. The drug lord tells one of his lawyers in another chat, “the DEA has all her devices tapped, and at her house the DEA has cameras to see who visits her,” apparently referring a women who was to meet with the actress.

In light of that, it is surprising that Guzman, who spent years evading capture, would have continued in such constant contact with the actress. While authorities narrowly missed capturing Guzman when they raided the hideout where the meeting took place in October, they finally got him on Friday.

Mexican federal officials have confirmed that the drug lord appears to have been infatuated with the actress. And when Mexican marines raided the house where had been hiding Friday, they found injectable testosterone, a treatment sometimes used to boost the male libido; though it was unclear if the medication belonged to Guzman or one of his associates.

The explanation might simply have been infatuation — something that would not be out of character for Guzman.

Hope cautioned that having leaked the transcripts might give Guzman’s lawyers ammunition to argue the government had violated legal requirements to keep evidence in criminal cases confidential.

“They are giving El Chapo some magnificent grounds to appeal,” Hope said.

And there was another caveat: in one message, the account identified as Del Castillo’s mentions a U.S. lawyer who she said had offered to handle Guzman’s affairs — presumably related to the movie project.

But the lawyer mentioned in that exchange denied having ever had any discussions about such an arrangement with Guzman or any of his representatives.

In the end, whether it was his interest in the actress or the movie project, it appeared to be all about Guzman’s ego. Federal officials also said they had detected recent efforts to register “El Chapo Guzman” as a commercial trademark, possibly by the drug lord’s lawyers.

“It was an ego project, to make the movie or meet Kate del Castillo,” Hope noted.