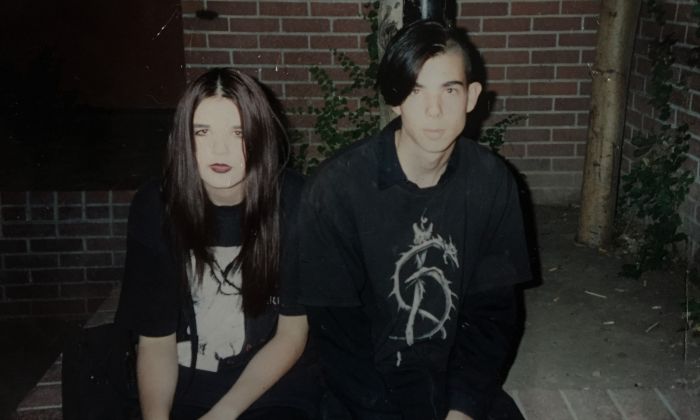 (Provided by the author)
Inspiring the World Competition

At 13, I left home and didn’t go back. I felt invisible and unwanted in my parents’ care. But on the street, I belonged.

Within a few weeks, I began using drugs, including alcohol, marijuana, and LSD.

Dreams, goals, ambition—I had those things. I lost them somewhere in the dank labyrinth of my mind. I became the infected. I survived as any disorder or disease survives. I hid in the shadows, in the curve of the wall, under the benches, in the closet, and I waited.

I became absorbed by an underground gothic vampire cult in Salt Lake City, Utah, in the early

‘90s. We believed in an alternate reality where our lives had meaning. I know believing in vampires, werewolves, and elves sounds crazy, and I’m sure some of us could have been institutionalized, but I believed lock, stock, and barrel.

was all my son had, riers preventing them from becoming independent. and I wanted him to be proud of his mom. I never wanted him to know the horrors of who I had been.

Dressed in black from head to toe, I fell into the depths of self-destruction. I was raped at 14 and then given to a male member of the cult who was 10 years older than me. His job was to protect me, and he did—from everyone but himself.

After being thrown across a room for leaving the house without his permission, I escaped by stealing a car with other street teens and leaving the state. When I left Utah, I thought I was pregnant with my protector’s child, and I knew he would kill me or I would kill myself.

Fleeing from Utah, I disappeared into the world of the Grateful Dead. With my boyfriend of the same age, we hitchhiked up the West Coast, consumed by an addiction to the heavy hallucinogen of the ‘60s, LSD.

My diaries from that time are full of plans to get LSD and where to sell it, only to get more. LSD was the center of my galaxy.

After some months, I called home because we needed money for more LSD. My mother convinced me to come back, saying things would be different. And they were different—but I wasn’t. Within two weeks, I left again, taking my older brother with me.

I went back to my street family, and I went back to the drugs. I sold drugs and hitchhiked between Montana and Oregon, sleeping in cardboard boxes and under overpasses. It wasn’t the life any parent wants for their child, and I didn’t realize the anguish I caused, until my own son was born.

I gave birth when I was just 17. By that time, my boyfriend and I had an apartment in Utah. As a recovering addict and junior high dropout, I knew I needed to find a reason to become the mother my baby needed.

I was going to leave again after he was born, taking him with me to live in a VW bus. But when I held him in my arms and his little hand wrapped around my finger, I gave up traveling the world, because I held the world in my arms. He saved my life.

I returned to school with three-quarters of a credit and fierce determination. I received my GED and began classes at Salt Lake Community College. Applying those credits toward my high school diploma, I graduated just one semester behind my class in December 1998.

I didn’t stop there either. I graduated from Salt Lake Community College in 2000 and the University of Utah in 2002. I worked for the Division of Child and Family Services as a child abuse investigator from 2002 until 2005, when I began law school. I graduated from law school in 2008 and was hired as an assistant attorney general in child protection that fall.

The year 2014 brought a sense of responsibility and desire to give back. I began to build the Homeless Youth Legal Clinic with the Volunteers of America Utah and Legal Aid Society of Salt Lake.

As program director of the Homeless Youth Legal Clinic, I provide free legal services to homeless youth to remove barriers preventing them from becoming independent. The justice system becomes a revolving door for many youths who are unable to meet court obligations. They are jailed and then lose all the progress they have made, requiring them to start all over.

What I advocate for is a sense of acceptance and belonging, and the safety that changed my life at a time when I was ready to change. It is those elements that make dreams and change possible for others who find themselves caught among the jagged rocks of life.

The past will always be there. You get to choose what to do with it. It can be chains, or it can be wings. I chose wings, and I choose them every day.