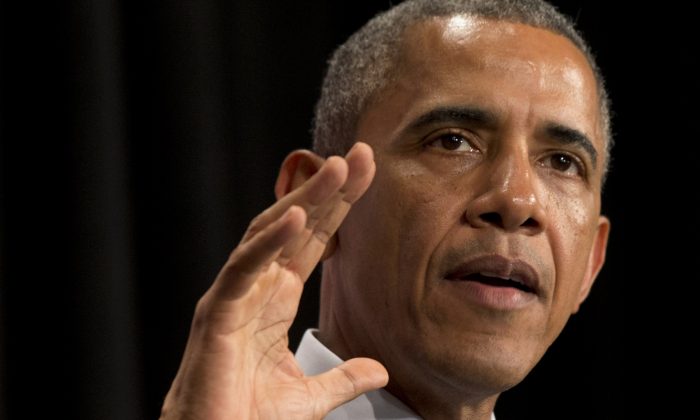 Drudge Report on Thursday put its focus on the Obama administration’s attempts to take executive action on immigration despite clamoring in Congress.

The website linked to a TheHill article, which quoted Democratic leaders as saying President Obama is “not bluffing” to take action on the matter.

“We’re at the end of the line,” Sen. Robert Menendez (D-N.J.) told the website. “We’re not bluffing by setting a legislative deadline for them to act.

“Their first job is to govern,” Menendez said. “And in the absence of governing, then you see executive actions.”

Other Democratic leaders said that a sweeping immigration bill passed in the Senate has been overdue in the House.

House Speaker John Boehner (R-Ohio), he added, should bring an immigration to the floor soon.

“I don’t know how much more time he thinks he needs, but I hope that Speaker Boehner will speak up today,” Durbin said. “And if he does not, the president will borrow the power that is needed to solve the problems of immigration.”

On Wednesday, Boehner said the Republican-controlled House will file an election-year lawsuit accusing President Barack Obama of failing to carry out the laws passed by Congress.

Boehner provided no details of the specific claims to be made in the suit, although Republicans have long accused Obama of selectively enforcing the health care law that bears his name and doing the same with immigration legislation on the books.

In response, White House press secretary Josh Earnest accused congressional Republicans of obstruction and said they had left Obama with little option but to make greater use of his executive authority.

“The fact that they are considering a taxpayer-funded lawsuit against the president of the United States for doing his job, I think, is the kind of step that most Americans wouldn’t support,” Earnest said.

The suit would be filed on behalf of the House and its mere existence would likely set off a partisan struggle. Three Republicans and two Democrats comprise a bipartisan group charged with overseeing House legal matters.

The group must meet to approve filing a suit on behalf of the House, and a party-line vote is all but certain.

Boehner strongly brushed aside a question of whether impeachment proceedings could result from the suit. “This is not about impeachment. This is about his (Obama’s) faithfully executing the laws of our country,” he said.

He also rejected a suggestion that the suit was designed to give traditional Republican voters a reason for going to the polls this fall when control of Congress will be at stake.

“This is about defending the institution in which we serve,” he said. “What we’ve seen clearly over the last five years is an effort to erode the power of the legislative branch.”