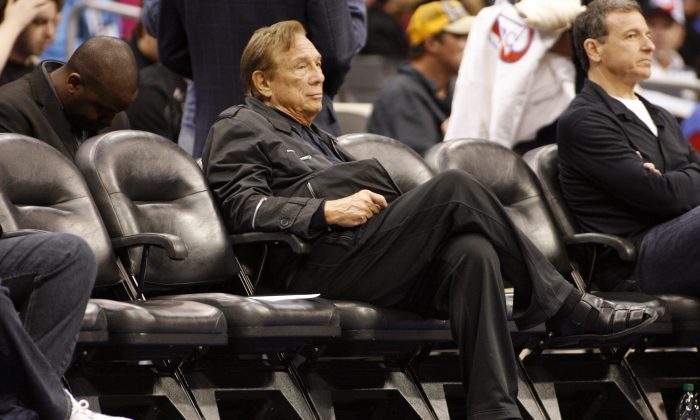 FILE - In this April 4, 2010, file photo, Los Angeles Clippers owner Donald Sterling sits courtside during the NBA basketball game between the New York Knicks and the in Los Angeles. NBA Commissioner Adam Silver Silver announced Tuesday, April 298, 2014, that Sterling has been banned for life by the league, in response to racist comments the league says he made in a recorded conversation.(AP Photo/Danny Moloshok, File)
US

Drudge Report: Matt Drudge Says Donald Sterling a ‘Democrat’, And the Media Failed in its Coverage

Drudge Report founder Matt Drudge said that Los Angeles Clippers Owner, who has been banned from the NBA, is a Democrat.

“NYT informed the unwashed how Bundy is a Republican. Leaves out NBA Sterling is a Democrat,” he wrote. He was referring to Nevada rancher Cliven Bundy, who made racist statements regarding slavery.

After the comment, the conservative National Review posted a story saying Sterling was a Democrat, but it later said his political affiliation is unknown.

“An earlier version of this post identified Sterling as a Democrat,” the editor of the National Review said in an update..

It adds: “Although his political donations appear to have been exclusively to Democrats, his official party affiliation is not known.”

Sunday’s Game 4 was the first time the teams took the court after a recording of the Clippers owner’s racist comments surfaced a day earlier. It drew 6.5 million viewers on ABC, up a whopping 48 percent from the 4.4 million who watched Game 1 on the network just over a week prior.

Then Tuesday’s Game 5 was played hours after NBA Commissioner Adam Silver announced a lifetime ban for Sterling and plans to try to force him to sell the team. It was also the Clippers’ first home game since the comments became public. More than 4.7 million viewers watched on TNT, up 34 percent from an average of 3.5 million for the previous two games on the network during the series. It was the highest-rated playoff game on cable this season, Turner Sports said Wednesday.

It’s common for TV ratings to increase as a series goes on, but not to this extent.

The interest in the Sterling story was evident even before the Clippers and Warriors took the floor Tuesday night. The nine minutes of pregame coverage on TNT, leading into the Wizards-Bulls game that opened the doubleheader, averaged 2.3 million viewers — a 45 percent increase from the previous 10 telecasts this postseason.

The Clippers lead their first-round series 3-2 and can advance with a win in Thursday’s Game 6.