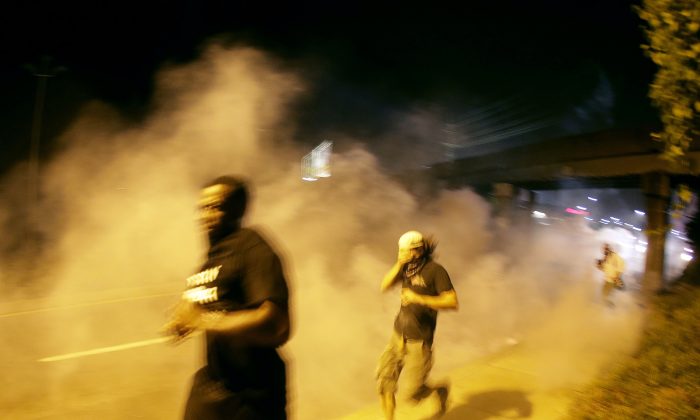 People run from tear gas after police dispersed a crowd Sunday, Aug. 17, 2014, during a protest for Michael Brown, who was killed by a police officer last Saturday in Ferguson, Mo. As night fell Sunday in Ferguson, another peaceful protest quickly deteriorated after marchers pushed toward one end of a street. Police attempted to push them back by firing tear gas and shouting over a bullhorn that the protest was no longer peaceful. (AP Photo/Charlie Riedel)
US

The Drudge Report on Tuesday again focused its attention to the situation in Ferguson, Mo. It focused on a Washington Post article saying Eric Holder, the US Attorney General, will head to the area to oversee a federal response to the shooting.

Officials said that Holder will arrive in Ferguson on Wednesday to meet with FBI agents.

Missouri Gov. Jay Nixon called on the National Guard to help restore order to the St. Louis-area suburb after more than a week of unrest, including rioting and violent protests.

The protesters say they’re upset over the fatal police shooting of Michael Brown, an 18-year-old black teenager who was unarmed.

On Sunday night, police officers used tear gas to clear the streets. Meanwhile, commander Capt. Ron Johnson of the Missouri Highway Patrol said that officials are responding to looting, gunfire, vandalism, and protesters who allegedly threw Molotov cocktails, according to The Associated Press.

An autopsy report on Monday indicated that Brown was shot at least six times, including two times in the head, according to the New York Times.

One of the bullets entered the top of Brown’s skull, which suggests that he was bent forward when he was shot. The bullets also appear to have not been shot from very close range, a doctor said.

“People have been asking: How many times was he shot? This information could have been released on Day 1,”  Dr. Michael M. Baden, who is the former chief medical examiner for the City of New York. He flew in to Missouri at the request of Brown’s family.

He added: “They don’t do that, even as feelings built up among the citizenry that there was a cover-up. We are hoping to alleviate that.” Baden has previously testified in a number of high-profile cases, including O.J. Simpson’s murder trial.

Forensic pathologist Shawn Parcells assisted Baden in the autopsy, and he added that a graze wound found on Brown’s right arm could have taken place in several different ways.