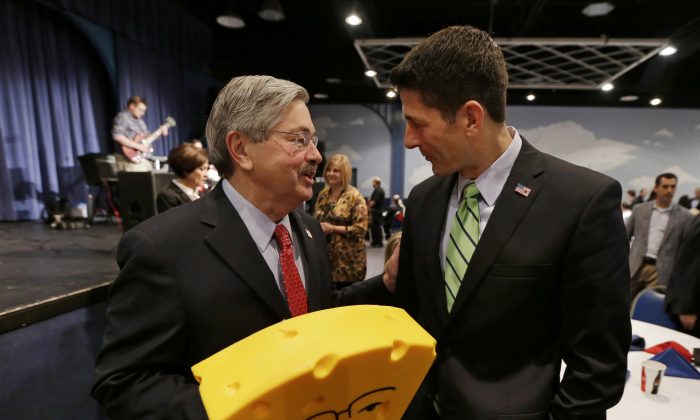 FILE - In this Nov. 16, 2013 photo, U.S. Rep. Paul Ryan, R-Wisc., talks with Iowa Gov. Terry Branstad, left, after presenting him with a cheesehead hat during Branstad's birthday bash and fundraiser in Altoona, Iowa. Branstad talked privately with Ryan before the fundraiser about a proposed reduction in the minimum amount of ethanol in the nation’s fuel supply. (AP Photo/Charlie Neibergall, File)
US

Drudge Report focused on Iowa Gov. Terry Branstad’s statements on Monday, saying he doesn’t want his state to host thousands of Central American kids who crossed the border into the U.S. from Mexico.

Branstad added he’s not sure if any of the undocumented Central American children living in the state.

“The first thing we need to do is secure the border. I do have empathy for these kids,” Branstad said, according to CBS. “But I also don’t want to send the signal that (you) send your kids to America illegally. That’s not the right message.”

Drudge has been focusing on the immigration issue for the past several weeks.

On Monday, the White House issued a statement on the kids.

“These children will — and other immigrants who are attempting to enter the country without documentation — will go through the immigration process and that means their claims of asylum will be considered by an immigration judge and by asylum officials,” White House press secretary Josh Earnest stated Monday, The Hill reported.

“What that means is it means that if a immigration judge determines that they face a credible threat of death upon their return to their home country, then, again, I’m not an immigration judge, but it is likely that the immigration judge will find that that person should be granted humanitarian relief.”

Branstad was among a group of governors that met Sunday with Health and Human Services Secretary Sylvia Matthews Burwell as the Obama administration sought support from states that could host the children.

Under current law, immigrant children from countries that do not border the United States and who cross into the U.S. by themselves are turned over to federal authorities. Then, they often are reunited with parents or placed with other relatives already living here while they wait for animmigration court to decide their future. The court process can take years.

Branstad was critical Sunday of the fact that there is no review of the immigration status of relatives who take custody of the children.

Since Oct. 1, more than 57,000 children have crossed the border. Most are from Honduras, El Salvador or Guatemala.