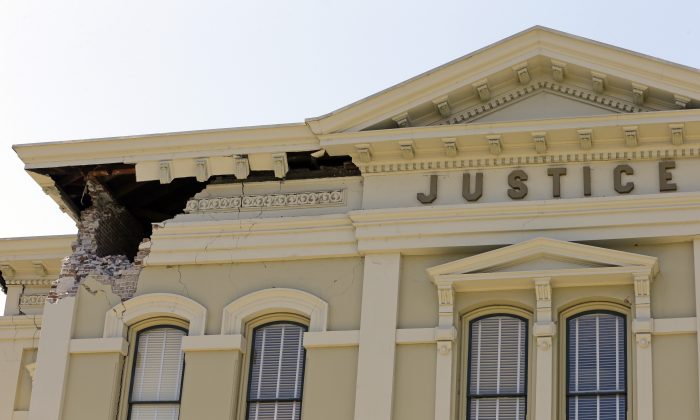 Drudge Report: An upper corner of the Napa County Courthouse displays structural damage after an earthquake on Sunday, Aug. 24, 2014, in Napa, Calif. Officials say an earthquake with a preliminary magnitude of 6.0 has been reported in California's northern San Francisco Bay area. (AP Photo/Ben Margot)
US

Following Sunday’s 6.0-magnitude earthquake in Northern California that left dozens injured, there’s fears that a “big one”–even bigger than the one that hit over the weekend–will strike. The Drudge Report made a Reuters article its focus on Monday morning, but the article m

It’s the largest quake to hit Northern California in about 25 years. A big earthquake in 1989 hit San Francisco, killing 63 people and injuring 4,000. It also collapsed a portion of the Bay Bridge that connects Oakland to San Francisco.

“A quake of that size in a populated area is, of course, widely felt throughout that region,” a spokesman for the US Geological Survey (USGS) told SMH.com. “The 6.0 is a sizeable quake for this area. It’s a shallow quake.”

According to SMH.com, a study in 2011 said that massive quakes have taken place on the San Andreas faultline roughly every 44 to 45 years. But the last huge quake was in 1857, which was a 7.9-magnitude.

Historical accounts said the quake was felt up and down California.

The study notes that the region is “overdue for the type of catastrophic quake”–or “The Big One.”

A report from ABC News said damage from the Northern California quake could hit $1 billion.

“I’ve been through a few of these and I’ve never seen anything like this, particularly in downtown Napa,” Napa County Supervisor Bill Dodd said, reported ABC News Radio. “The county building is just in total disrepair, and they’ve moved it down to the sheriff’s office — so that’s where the coordinating all the emergency services for the county.”