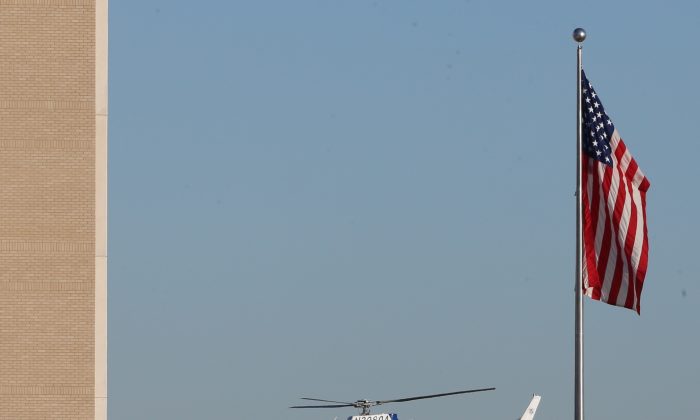 A Department of Homeland Security helicopter flies over the El Paso VA and Beaumont Army Medical Center campus during the search for a gunman in El Paso, Texas on Tuesday, Jan. 6, 2014. (AP Photo/The El Paso Times, Victor Calzada)
US

Nearly 17,000 federal government employees made more than $200,000 last year, according to a report on Tuesday.

The National Journal took compiled data from FedSmith.com, showing the breakdown of the 16,900 federal workers who were paid $200,000 as a base salary. Only about 1.6 of all federal employees on the list took home that much, the report notes.

The report states: “Most of the high earners worked as medical officers at the Veterans Affairs Department. Other agencies that require a highly specialized workforce paid several employees at least $200,000; these included the National Institutes of Health, the Centers for Disease Control and Prevention, the Food and Drug Administration, the Office of the Comptroller of the Currency, the Federal Housing Finance Agency, and the Securities and Exchange Commission.”

“The number of workers surpassing that income level is likely to be higher than 17,000 since information for Defense Department employees is not included. It also does not contain incomes for White House employees. The overall incomes for the high-earning workers are likely to be larger as well, as the database does not track bonus pay,” says the Daily Caller.