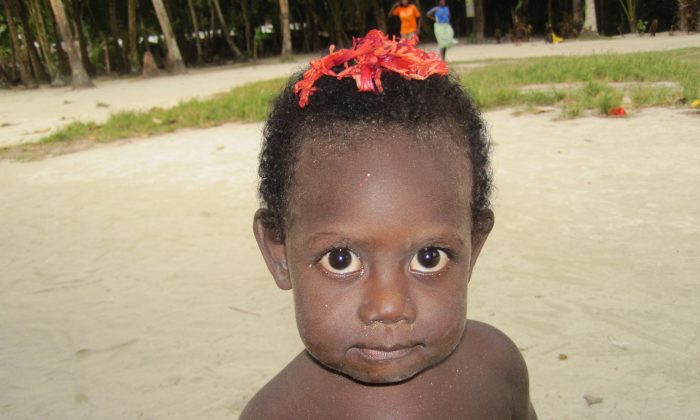 A little Carteret girl faces an uncertain future in a new home victim of a changing climate.
Opinion

Global warming is killing the Carteret Islands as tides sweep away a people’s community and culture.

The last time I wrote about global warming,the collapse of ice sheets and rising sea level several readers contacted me with views ranging from “Stop scaring my children” to “Don’t you know climate change is a hoax”. We all have our opinions but today there is overwhelming evidence that the world is getting warmer.

Chief among the “believers” are the Carteret Islanders. Some 2000 people lived there and over the last 25 years sea level has risen more than 10 cm. Now this doesn’t sound much but it takes away a lot of that tiny 0.6 square kilometers that they all share. Worse is that the rising sea is moving farther inland through the soil and their food crops are being lost forever.

The Carterets are a little group of islands perched on an ancient undersea mountain in the west Pacific. Carteret Atoll is part of Papua New Guinea located 86 kilometers northeast of Bougainville at 4°45’S, 155°24’E. Carteret Atoll is a string of low lying islands in a horseshoe shape. Stretching 30 kilometers from north to south, with a total land area of 0.6 square kilometers, they have a maximum elevation of 1.5 meters above sea level.

In May, 2009, 40 families who’ve been called by the press the “world’s first climate change refugees,” were relocated from their flooded tropical Island to the nearby Papua New Guinean island of Bougainville. The remaining 2000 residents refused to leave their homes and their livelihoods behind them. The forecast at the time was that they would hang on till 2015 when it was thought it would become impossible to stay in their ‘island paradise’.

The government started moving 10 families at a time in 2003 and in 2007 began food aid to the islands as their crops slowly failed. But lack of money and a surplus of traditions and cultural values have resulted in a lot of foot dragging and nearly 1000 islanders remain.

By 2014 many of the people were still hanging on as flood tides swept through their island destroying what remained of their crops. Water left in the island’s center from the high tides is now a shallow swamp and breeding place for mosquitoes. Malaria is becoming a problem.

To make matters worse the supply ship that brings food relief two or three times a year recently went aground on their reef and will probably have to be abandoned. Replacing the supply ship will be a problem for their impoverished government.

Recent comments from geological experts suggest that the Carteret problems are more complex being partly caused by sinking of the islands at the same time that sea level is rising due to global warming. Australia’s National Tide Facility has measured an annual rise of 8.2 mm in sea level on the islands in every year they’ve monitored.

This, coupled with global warming’s propensity towards making weather patterns more severe makes the future flooding of the Carterets an absolute certainty.

The end result is that these proud people must leave behind the only world they know and face an uncertain future as the world’s first climate change refugees.

This in itself creates further challenges for them since there are no legal precedents for this kind of ‘refugee’ and acceptance in their new homes is by no means clear. Political inertia and financial constraints have left the people feeling abandoned and helpless.

A major consequence of this green house global warming is a rise in sea level. As the years go by this continuing rise will impact on more and more of the world’s people, many in our low lying major cities. Some of the world’s most populace and agriculturally productive land is less than a meter above sea level.

As I sit at my desk I can see the faint haze of pollution over the city; the small cost of doing business as usual. How do I manage to take this for granted? How can I live with it and forget what I am doing to the Carteret Islanders?